Oregon of the East: Are These Maryland's New Football Jerseys?

Share All sharing options for: Oregon of the East: Are These Maryland's New Football Jerseys?

For a lot of people, this probably isn't newsworthy, especially given Maryland just got a basketball commitment and is now floating on the NCAA Tournament bubble. But given my prior obsession with uniforms of both the basketball and football variety, I'd be remiss if I overlooked the day they finally came through with it.

The basketball jerseys leaked out a long time ago and have been in use all year; we knew some football ones were coming, too. We even saw a few low-quality pics of them. But now, for the first time, we have a real idea of what they look like, at least the gold and black varieties. (Via bloodwatermission in the FanPosts and Haroon Brown's Twitter:) 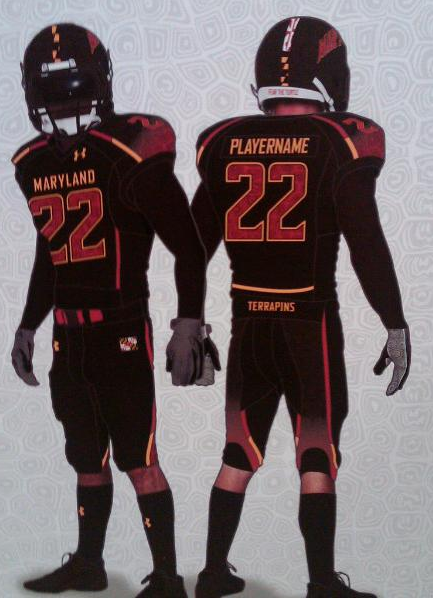 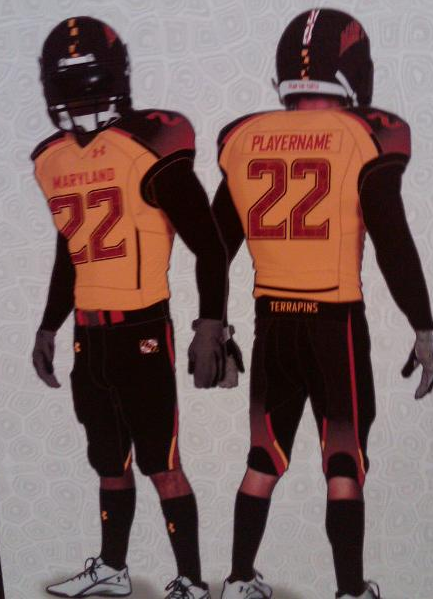 I assume there are going to be four colors of jerseys - with white and red, looking much like these do - with the pants options to match.

The biggest departure is in the helmet, which is all black and now reads "Maryland" in block text as opposed to the classic script "Terps." There's no telling whether or not these are alternate helmets or full-timers, so the white and/or script Terps may still be around. There are two really cool touches on the helmt, at least if you ask me - the helmet stripe is actually the Maryland flag, and the back of the helmet bears the mantra "Fear the Turtle." Good combo.

Elsewhere, things are basic. I like the two-tone piping that's kind of reminscient of USF's jerseys. And I'm actually a big fan of the numbers in general: I like the font, plus there's the faint turtle shell overaly. I'm guessing you can find the overlay elsewhere on the jerseys, too.

I'm not a fan of the VT-esque gradients on the shoulder and back of the legs. Those are the things that look good on paper and terrible in practice. Hopefully they end up looking okay.

All in all, it's a mixed bag. Either way, Maryland seriously needed some uni upgrades, and these will do just fine. More importantly, though, they're also futuristic/different enough to make Maryland stand out, and I assume there will be 20 or so combinations, not including alternates. For publicity and recruiting, that's big. Just ask Oregon.