Maryland's become famous for their ... polarizing, let's say, uniforms, probably more than their play on the field at this point. But Notre Dame sees their turtle-print helmet and raises them, uh, this: 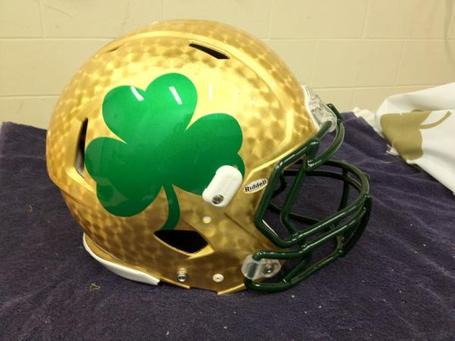 Yes, that is a gigantic shamrock on a weird gold texture-y thing. Whether or not its actually more or less aesthetic than Maryland's new helmets is a matter of opinion; Maryland's might be more out-there, but they're certainly not violating a sacred tradition the way these are.

Why they'd do this, instead of keeping the beautiful new even gold-er helmets they just debuted weeks ago, is beyond me.

But we've gotta answer this somehow, right? Even the Maryland Pride unis might not stand up. I say we go retro.

Or, y'know, use the national audience as a way to convince people that Maryland's uniforms aren't that ugly by going with the Demetrius Hartsfield-modeled retro-Redskins look.

Regardless, I'm thinking that fans of uniform traditionalism might be better off avoiding the TV on Saturday.