Maryland Makes the Cut for Five-Star Local Stefon Diggs, Then He Drops Them

Share All sharing options for: Maryland Makes the Cut for Five-Star Local Stefon Diggs, Then He Drops Them 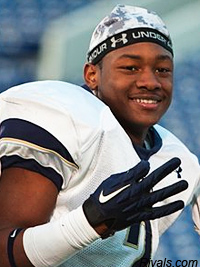 This takes that narrative about "high school recruits being indecisive" to a new level. Late last night, Stefon Diggs, a five-star wide receiver out of nearby Good Counsel, cut his list to eight schools: Auburn, California, Florida, Michigan, Oklahoma, USC,Virginia, and, yes, Maryland.

It was quite the uphill battle for the Terrapins, and often local kids like him will list the local school out of respect, either for the institution or their family members who want them to stay home. But hey, at least Maryland was in the conversation.

At least, they were for a night. Because this morning, about 12 hours after Diggs had cut his list, he made a change: he cut Maryland and added Virginia Tech in its place.

So, cross that one off the list. In all honesty, Maryland never had too much of a chance with Diggs. His parents supposedly liked the hometown school, but apparently not enough for him to seriously consider it. Although I am a bit confused about how they were okay before but not now. Perhaps VT called and made a push, and he just dropped off the lowest school of his 8 to compensate for adding another.

Anyway, combined with Ronald Darby continuing to look around, Eddie Goldman being Eddie Goldman and never really considering Maryland, and Cyrus Jones being increasingly infatuated with the Alabama schools, it looks like Maryland's only hope for landing a big-time commitment is Noah Spence.

Recruiting is a particularly fickle process, and with another two months or so until signing day, plenty can change. Right now, though, things don't look extremely bright.