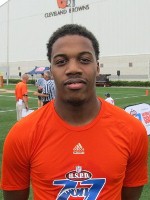 It's been an undeniably rough season for Randy Edsall & Co., both on and off the field. This might not drastically change that paradigm the way a Noah Spence or Ronald Darby could, but it's nice to finally get some momentum in the football program: the Terrapins landed an important commitment from Akron defensive end/linebacker/wide receiver DeShawn Dowdy, who chose Maryland over Cincinnati, Iowa State, Purdue, and West Virginia.

Dowdy's unranked on Rivals, three stars on Scout, and three stars (76) on ESPN. He's primarily a defensive end and wide receiver, and returns kicks, too, which should tell you something about his athleticism (and, in all honesty, his size). He's a bit light for DE (6-4 and 225) but I imagine his frame would support a solid amount of weight, and he's certainly quick. Get him in the program, perhaps redshirt him and get some weight on him, and see what happens from there. He might end up at linebacker, where Maryland needs some serious depth.

Talent-wise, Dowdy is a strong get but not a game-changer. (And beating out Cincy and West Virginia, while promising, doesn't change the perception of a weak coaching staff.) What makes him so important is that it's been forever since Maryland football has had even the slightest bit of good news. Seriously: he's Maryland's first commitment in over a month, and only their second since August. For a class that currently stands at 17 and needs to stand at 25 or 30, that's hardly encouraging. This is a good sign, and hopefully the pace will pick up.

Check the highlights below. He returns a kickoff for a touchdown and takes a WR reverse sixty yards or so. The thought of him lining up at DE is both confusing and exciting.