Happy Thanksgiving, everyone. This'll almost certainly be the only post of the day, so it better be worth it. And it is worth it. Like, Danny O'Brien cameo in a Wale music video worth it.

Because that's what happened. Remember when Wale gave a shout-out to DOB before the season in his song Barry Sanders? Well, now it's in video format.

Check the shot at :44. Or the screenshot below. 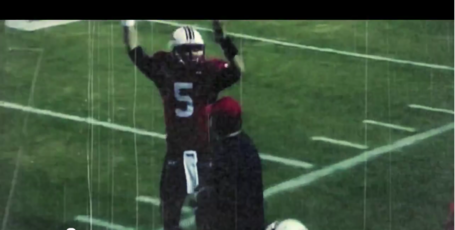 DOB's season has been supremely unfortunate and, sadly, may not be in College Park next season. Even if he is, a starting job isn't guaranteed.

Regardless, we need more Maryland players to be mentioned in rap song/videos. Some high school kid sees this video, and it helps to cultivate a culture of cool, particularly in conjunction with Under Armour. It's inarguable that Randy Edsall isn't the world's best "cool" coach, but hey, I'll take whatever helps.