As I said in the Maryland Minute, this past weekend was maybe the worst 8 hour stretch of sports in my sports life. Obviously there have been more horrific events on the sports scene that have occurred since I've been alive, but I was too young to remember them or understand what was happening at the time. I was a little one-year old when Irsay stole the Colts and snuck out of Baltimore in 1984 and I was three and a half when Len Bias died, so I don't remember either event, both of which obviously would have won the "worst sports day ever" award for me.

And there have been other events, like gone in 54 seconds and the 2001 Final Four that rank up there in terms of soul-crushing defeat, but I've never had two of my teams go down on the same day, with so much on the line, on the same channel, on back to back broadcasts. And having both teams winning late, only to see them piss away a win, made it even worse.

So although the Ravens' season is over, and even though on Saturday I was really upset about Maryland's loss and blown opportunity for a signature victory against Villanova, there is still reason for optimism for our beloved Terps. So, as they say in the Hitchhikers's Guide, DON'T PANIC.

In Maryland's six losses this season, the largest margin of defeat was nine and the average margin of defeat has been just 5.8 points. And of the five teams Maryland has lost to, the average RPI of those teams (as of Tuesday morning) was 21.6, including losing to three teams currently in the Top 12 of the RPI. (all RPI stats are courtasy of RealTimeRPI.com and are as of Tuesday, January 18th).

So in terms of loses, Maryland can hang their hat on the fact that they:

We all know Maryland has had their struggles at the free-throw line and beyond the arc this season, with the former possibly costing us victories in several of those six loses. But the good news is, in terms of correcting something, free-throws have to be at the top of the "things you can correct during the season" list. I'm sure they'll get there, hopefully soon.
But what about moving forward - does Maryland have anymore opportunities to secure a few "signature" victories?While Maryland's best win thus far has been over Penn State (never thought I'd be saying that in January), who is currently 58th in the RPI, the Terps do have some chances to capture several "signature" victories in their upcoming games. Here's a look at who Maryland has left on the schedule and the RPI of those teams: 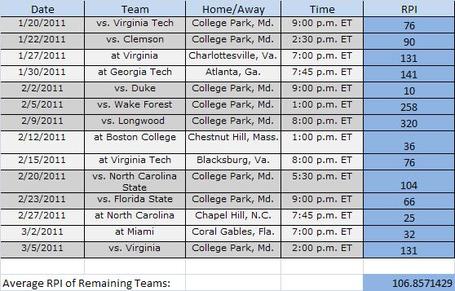 At the time this story was published, Maryland has four more chances to capture a victory over a top 40 RPI team, but three of those four games are on the road, with Duke being the only game at home. After the way Maryland played Duke at Cameron Indoor, you have to think they have a chance of pulling out an upset win over Duke at home on February 2nd.

Maryland's next chance for a top 40 victory comes on February 12th at Boston College. It still baffles me that we lost that game at home to BC several weeks ago, so I expect the Terps will be hungry to return the favor to BC and win on their home court.  After those two games, Maryland doesn't have a chance at a top-40 win until February 27th at UNC. They then follow that game with a trip to Coral Gables for a show down against Miami, their final top 40 RPI team of the season.

Maryland's remaining schedule seems to set them up for a nice run to end the season. The average RPI of their remaining teams is just over 106 and eight of their last 14 games are at home in College Park. If Maryland can take care of business against their lesser remaining opponents and win two or three of their games against the top 40 RPI teams, I think they'll be on the inside of the 68 team field on Selection Sunday. They could end up with 12 conference wins, but they have to play complete games going down the stretch.

They should be able and expected to win eight of their remaining conference games, but they need to win at least two of the four games between Miami, UNC, Duke and BC. They might be able to get in with 10 conference wins if one of those wins happens to be against Duke and the other loses aren't against one of the conference bottom-feeders, but I'd rather not take my chances. I'm pretty sure 11 wins in the ACC equates to a tournament invite, but I'd be sweating a little on selection sunday if Maryland only has 10, unless they made it to the finals of the ACC Tournament.

Maryland's RPI is currently 91. They have the chance to improve upon that and establish themselves as the second or third best team in the conference. But in order to do so, they need to stop settling for moral victories, capitalize on their free-throws, and play complete, 40 minute games. They have their opportunity in front of them, so as I said, don't panic. But their chances to position themselves on the inside of the field of 68 are slowly slipping away. They need to capitalize on them soon or March Madness is going to be a depressing time for Terp Nation in 2011.

Also, remember where Maryland was this time last year. Their best victory was over Florida State, they had lost to William and Mary at home, and people were worried they'd miss the tournament. They then caught fire and ended up as co-ACC regular season champs. Gary Williams' teams have a tendency to improve throughout the season. Hopefully this team will continue to do just that in the coming weeks.

Finally, because the ACC is very much open for the taking this season, Maryland could make a run at the ACC Tournament title to punch their ticket to the big dance. Obviously you don't want to reply on that, but I don't know if you can say any team is a clearcut favorite to win that event this year, outside of Duke.

Taking all of that into account, don't panic. There is still a lot of basketball to be played. But time, along with chances to prove they deserve to be dancing in March, are running out.