Share All sharing options for: 2011 Recruiting Big Board Version 3.0: Results Are In, Faust Takes Top Spot

A few days ago, we asked you to vote on who you'd target if you were Gary Williams, based on talent, need, attainability, and just about anything else you wanted to throw in there for a little feature called the Big Board: it's a barometer of where Maryland's targets stand in the fans' eyes.

This is the third iteration of the Big Board, but the first since the two July open periods have ended. Well, the final standings are now solidified, and I'll let you in on a little secret: Nick Faust has taken the top spot.

Full rankings are below the jump:

Faust being #1 shouldn't surprise anyone; he's been tearing up the circuit and all of his rankings should rise when the Big 3 finally re-rank. Past him are Adjehi Baru and Jabari Brown, who were literally neck-and-neck; Baru overtook Brown in the final 30 votes.

If you're wondering how close the votes were, here's a graph: 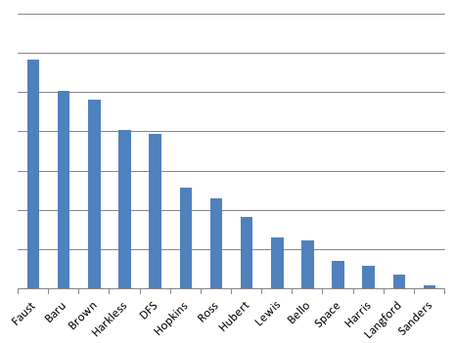 You can kind of see the tiers developing: Faust, Baru/Brown, Harkless/DFS, Hopkins/Ross/Hubert, etc. A few observations:

The past two big boards are here and here. Any thoughts? How'd you vote?