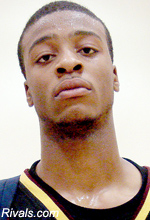 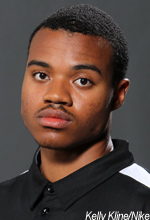 In terms of established, ballyhooed wing targets for Maryland, that leaves...Nick Faust and Maurice Harkless. While both of them are high four-star, low five-star type of talents and would undoubtedly be two of the best wings Maryland's ever recruited alongside last year's Mychal Parker, they're anything from guarantees. Faust's recruitment has been expanding, though Maryland might still be the team to beat. Harkless will be a battle with St. John's. Neither are sure things.

Of course, they aren't the only wings Maryland is recruiting, just the most discussed ones. Antwan Space is setting up visits, one of which will be to Maryland (in the IMS teaser, he said Maryland's visit would be his final one; "best for last", in his words). Bernard Sullivan already did, and Maryland is one them. Neither of them are true wings, to be frank, but instead 3/4 tweeners. That might be a bonus, though; instead of having to choose between an extra wing or an extra big man, Maryland could get someone who could do both.

Sadly, neither Space nor Sullivan gets the talk they deserve, here and elsewhere. Part of that is my fault; I've often become preoccupied with Harkless and Faust, while not giving Space and Sullivan their dues. In an effort to reconcile that, let's start talking about them now, shall we?

We'll begin with Space, who's a more well-known name. A 3/4 type of player from the Dallas-Fort Worth area, Space is often described as a "point forward." He's a four star player on Rivals (#92 nationally, which is a little lower than most wings Maryland's been recruiting), three star and unranked on Scout, and unranked on ESPN. Calling him an unknown quantity is a bit of an understatement.

However, he seemed to impress on the AAU circuit this spring and summer, so it's safe to expect those rankings to rise across the board. He was impressive in the Adidas Invitational (link one, link two) and in Vegas (link one, link two). ESPN called him one of the three players that "took their game to the next level" in Vegas, which to me indicates that he's due for a pretty sizable rankings bump.

As for his skillset, he's a combo forward thanks to his size - varies depending on the source, but usually around 6-8, 200 - and his unusual shooting ability and skills. He has a nice stroke that extends to three-point range and has been described as a "deadly" shooter from deep. His feel for the game is generally lauded as well, and he's "crafty"; his feel allows him to create his own shot and find open teammates, which lets him fulfill that point forward role.

He's not quite as effective in the post, but he can get on the blocks occasionally to keep the defense on their toes. For the record, he's not the world's greatest athlete; he's a pure shooter. If he ends up around 6-9 by his sophomore/junior year, he could be a serious matchup problem at either the 3 or the 4.

(An interesting digression: all the most recent write-ups say this, almost exactly. But one in March from Slam said that he was a "nasty athlete" that was rough around the edges and lived around the hoop; the exact opposite of what most others seem to indicate. Goes to show how fast things can change and/or how unreliable the world of basketball recruiting can be.)

He'll probably draw some comparisons to Tobias Harris even though he's not nearly as big, both because he's fresh in the mind and because their games are pretty similar. Both are combo forwards that have a great feel of the game and a very solid shooting stroke. He's thinner and not as athletic as Tobias, but other than that they aren't all that different on the surface.  Maryland's found success with tweeners and perimeter big men in the past - ask Landon Milbourne or Tajh Holden.

He recently came out with his top five, and says he wants to visit. Gonzaga's been on him for awhile, and seem to really want him. But his top five's not terribly imposing and it would appear that Maryland's getting an official visit soon.

Bernard Sullivan isn't quite as well-known as Space around these parts, but he might be more talented. Another four star 3/4 combo forward, this time from North Carolina, Sullivan has been a relatively recent addition to Maryland's recruiting target pool, picking up his offer late in the summer in Orlando for the Super Showcase, which happens late in July. He, like Space, was impressive over the summer, and figures to get an early call if Maryland whiffs on Faust or Harkless.

He's more of a known commodity than Space around the internet, and generally ranked higher: four stars on Rivals (#66 nationally), 91 grade on ESPN, and four stars (#70) on Scout. He'll be seeing a bump just like Space; his summer was nearly as impressive. He shot up after a solid spring, but also stood out at the Super Showcase and NBPA Top 100 Camp. Rivals called him one of the top five "no-names" that saw their stock rise after a solid summer outing.

Although he, like Space, is a combo forward, they are just about as different in style as you could get. Whereas Space is a shooter that hangs outside, Sullivan is an explosive player in the paint that specializes in dunking and rebounding. He's at his best running the floor in an up-tempo game and finishing on the break, though in a half-court game he tends to settle into the paint area more than the wing. His handle and jump-shot are developing; right now, they're probably preventing Sullivan from being a wing.

The only problem with Sullivan's game comes in the fact that he doesn't have a real position. He's wide-bodied and thick, but only 6-7. If he could get up to 6-9 or even 6-8, he'd be a very highly-recruited player. As it is now, he's a very similar version of Landon Milbourne with a slightly more developed post game. Landon came into Maryland as a SF/PF 'tweener with not much in his arsenal except athleticism. His jumper arrived his junior year; his ballhandling never really got here. Sullivan is about that right now, just a little bit ahead in the skills department.

If you were asked to take a better version of Landon Milbourne, I'm pretty sure you take that deal every day unless Harkless is guaranteed to be a Terp. The problem is that, unlike Space, Maryland will have a lot of competition. He's going to visit Maryland, as I said above, but a lot of the other schools he's looking at are just as good as, if not better than, the Terps. For instance, he's receiving serious interest from Duke, though no offer has been presented yet. If the Dukies miss out on some of their bigger targets, he may become an option. He used to be a Clemson lean, but it's safe to say that's no longer the case.

Both Space and Sullivan give Maryland a lot of flexibility and could become either a wing or a big man in their time here. Both are relatively attainable, and both don't get enough attention.