The July open period is awesome because it's when basketball recruits get to make, for the most part, their final impressions on coaches and scouts; it's when the cream of the crop separates themselves from the rest and when coaches find at least one new target.

After July ends, though, there's a different type of awesome, because that's when the real recruiting starts. Once the coaching staff identifies who it is they want to go after, the top tier and second tier and third tier targets, the real fun begins: getting those players to sign up.

This year, Maryland finds themselves in an unusual position; they're in pretty well on a lot of very good, very highly-ranked targets. That was actually the case last year, too, with Tobias Harris, C.J. Leslie, and Terrence Jones, but only one of them even ended up taking an official visit. Even with that, the two months after July still saw visits from Harris and Hippolyte Tsafack, a commitment from Mychal Parker, and in-home visits with Harris and C.J. Leslie.

Maryland's upped the ante from last year, seriously recruiting Nick Faust, Jabari Brown, Adjehi Baru, Johnny O'Bryant, Mikael Hopkins, Maurice Harkless, and Dorian Finney-Smith. The key this year will be getting more than one or two of them on campus, and hopefully a few becoming Terps.

Obviously, the next two months will be very busy. Few dates are set - Adjehi Baru should be cutting his list to five sometime before the end of August, and Maurice Harkless will visit on September 17, but past that nothing - but they'll pop up with regularity as time goes own.

Because I figure to be talking a lot about basketball recruiting this month, let's formally asses where Maryland stands right now: 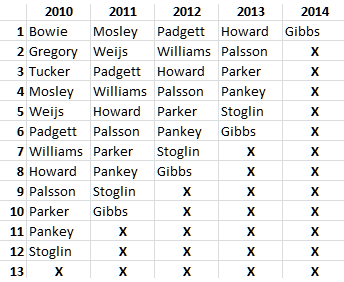 That's Maryland's scholarship chart; as you can see, they have one open scholarship for this year, assuming Steve Goins isn't part of the team anymore...and we're pretty sure he's not. We think. We've been wrong before.

Anyway, if Goins is really gone, then there's officially three more scholarships open for 2011. The next logical question: how should Maryland use those scholarships?

To answer that, we need to take a couple of things into account: Maryland's roster as it stands, the skill level of the players Maryland's recruiting, and the future prospects in 2012 and 2013.

For the first part, it's all about identifying needs. In 2011, Maryland would have one true point guard, two point guard/shooting guard combos, two true wings, one big man/wing combo, and three true big men. The year after, Maryland will still have their best big man - hopefully - but their best wing, Sean Mosley, will have graduated.

So it looks like Maryland definitely needs at least one true wing, maybe two, and at least one big man. That last scholarship? The smart money's been on another wing, but I have my own qualms with that (which I'll hit on in a minute).

As for the skill level deal, there are a few tiers of recruits for Maryland. Like these:

Tier One: Nick Faust, Jabari Brown, Maurice Harkless, Dorian Finney-Smith*, Adjehi Baru, Johnny O'Bryant - Maryland takes any and all of these in any combination. Faust, Brown, and Harkless? That's a pipe dream scenario for sure, but roster planning be damned, Maryland's not turning down anyone from this group if they want to come. Now, getting a commitment from one (like, say Finney-Smith) might make the other not want to come (like, say, Harkless) for playing time reasons, but that's beside the point for now.

*Finney-Smith's kind of a tier 1.5 guy to me because he's at his best as a secondary option, but odds are that no team's turning him down. If Maryland's scholarship situation (see further below) got serious, I could see Maryland pulling the plug on his recruitment.

Tier Two: Deuce Bello, LaQuinton Ross, Antwan Space, Mikael Hopkins, Desmond Hubert - Maryland probably takes any of these guys if they want to come, but it's still dependent on the roster situation. That is, if Maryland somehow gets Harkless and Finney-Smith, they're not giving that final 'ship to Ross, even if he wanted it (which, of course, he probably wouldn't). They have to fit into the roster plan.

Tier Three: Devin Langford, Jermaine Sanders, Jose Rodriguez, Greg Lewis  - Backups, plan Bs. They're the guys Maryland will look to if they whiff on both Tier One and Tier Two. This group will get larger if they actually do; most teams don't actively recruit plan Bs until they need them. Lewis is a bit of an outlier in that he's the only one of the group that, if he wanted to commit after Baru and O'Bryant went elsewhere but before Hopkins decided, would probably be accepted.

When you take those two things into account, a rough scholarship plan begins to take shape. Basically, it's this: Maryland definitely needs one wing, definitely needs one guard, and, considering that there are seven wings in tiers one and two and just four bigs, apparently one more wing.

But I disagree with that, because it doesn't match up with the third thing I mentioned: future recruits. (Warning: some will think this is reactionary/doesn't make sense. I disagree, personally.)

If Maryland takes up all four scholarships, which they probably will, and they go the expected two wings-one big route, they'll have brought in seven guys in past two years that play the 1-3 - Pe'Shon Howard, Terrell Stoglin, Mycal Parker, Haukur Palsson, Sterling Gibbs, commitment #2 and commitment #3 - and just three big men - Ashton Pankey, Berend Weijs, and commitment #4. When you consider that Weijs is only here for a year, it becomes obvious that Gary would have either seriously recommitted to playing small ball or made a grave mistake in roster planning.

It gets worse when you look at 2012. With just two scholarships open, space will be tight. Nationally, it's the year of the big man, but not quite for Maryland. Out of all the players Maryland's been in contact with for 2012 so far, there's a lot of wings (Omar Calhoun, Torian Graham, Jerami Grant, Justin Anderson, Savon Goodman), a few point guards (James Robinson, Tyler Lewis, Daquan Cook), and a couple of undersized 3/4 tweeners (Cinmeon Bowers, Montrezl Harrell, Isaiah Miles). The only big men Maryland's really hit are Daniel Ochefu, who's top 10 nationally, and Sim Bhullar, who's massive and has a boatload of offers.

(*All that could still change - obviously, most of Maryland's current top tier targets were late developments - but it's a lot easier to go the Jabari Brown/Mikael Hopkins/Sterling Gibbs route and get on people earlier. You can't always count on really good recruits to pop up out of the woodwork every year. Even last year's top targets, with the exception of Terrence Jones, had been recruited for a long period of time.)

For those of you that haven't gotten my point yet, Maryland's in great shape with a lot of awesome wings/guards and not a lot of awesome big men. With just two scholarships, they'd find themselves in the very uneviable position of ceasing to recruit James Robinson because they have a commitment from Justin Anderson and no one to replace Jordan Williams.

So I'll cut to it: unless those tier one recruits decide to lace it up for Maryland, the Terps need to be looking at two big men in this class to avoid having to get one in the next one. Unless one of the guards transfer out or Haukur Palsson decides the states ain't for him, Maryland's in a scholarship and big man crunch, with a lot of guards and not a lot of big men or scholarships.

Is that thinking too far ahead? Probably. Is it worrying too much, reading too much in-between the lines? Maybe. But hey, I'm trying to avoid extra work.