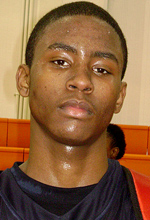 In terms of small forward targets for Maryland, it may not get much better than Maurice Harkless. While Nick Faust is likely Maryland's #1 target at SG and has a decent margin over Jabari Brown, Harkless has a slight lead in the fans' eyes over Dorian Finney-Smith for favorite SF. And after that great summer, who could say otherwise?

After decommitting from UConn, one of the first schools to call Harkless was Maryland. The Terps made his initial list cut, and with friend of Harkless Sterling Gibbs on board, appeared to one of the schools to beat.

Unfortunately, Oregon and Kentucky, both of which are big-time recruiters, have recently worked their way into the recruitment. Oregon doesn't have a great record of basketball recruiting, but Nike can do wonders. Kentucky was actually his second choice the first time around, so it stands to reason that they'll be tough to beat, too.

But there is good news: Harkless plans to take an official visit to Maryland on Sept. 17. That's one day before Maryland plays West Virginia, which means that week has awesome potential. Hopefully Sterling Gibbs can make it down to CP the same weekend.

Look, students, I know you guys try hard and everything, but last time around the Terps got played by Tennessee's students, who painted a friggin' rock. Compliance issues be damned, I want to see some Harkless signs, t-shirts, the giant flowery "M" changed to "MH"; give me something. Get on it.

By the way, Harkless also plans to visit St. John's on Sept. 2, and the Johnnies figure to be one of Maryland's top competitors for the services of Harkless. Just thought you should know.

Regardless, basketball recruiting has a few very busy months coming up.