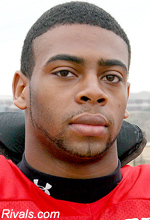 Maryland has a bunch of players leave the team every spring and fall year, for any variety of reasons. For whatever reason, this year has seemed to be especially bad. Javarie Johnson, Maryland's star incoming freshman linebacker, left for academic reasons. So did Caleb Porzel. And now it's Avery Murray.

Murray was a true freshman last year and played in 11 games; he ended the season with seven tackles. He was listed as the top backup for Alex Wujciak at middle linebacker on the Maryland depth chart. He was one of the best freshmen from last year and was promising to be a future starter at LB.

Now, Murray is leaving the program for personal reasons. According to IMS, he is considering transferring back closer to home in South Carolina; Coastal Carolina is apparently an option.

If Donohue doesn't work out, then maybe David Mackall could fill in. Mackall has never struck me as a middle linebacker type of guy; he's been a defensive end-outside linebacker 'tweener, so a move to MLB might be unnatural.

Strangely, Maryland's linebackers went from being a massive strength in terms of depth to a relative weakness. Both Johnson and Murray looked like future starters; now Maryland will be looking to Donohue, Mackall, and Darrin Drakeford. Not a bad lineup, but not a great one.

This was a far cry from a good year in terms of departures, and two more could be coming in Zach Kerr and Ronnie Tyler, which would be very painful. But at least Murray's departure doesn't seem connected to academics or rules; tough to complain about those.