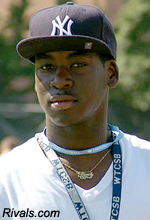 Maryland football's not exactly in a position to turn down anyone right now. So picking up a three-star defensive end with a couple of high-major offers sounds pretty great. That works out well, because it's exactly what happened earlier today when they picked up a commitment from North Carolina defensive end Dontez Tyler.

Tyler's a three-star prospect on both Rivals and ESPN, which are usually regarded as the best football ranking services. He's unranked on Scout. His size - 6-4, 220 - and speed - 4.7 40 - point to him being a speedy edge rusher like Javarie Johnson or David Mackall. That continues the trend of quicker, faster linemen that Maryland's been recruiting on both sides of the ball.

Meantime, that's the thirteen commitment for Maryland on the season. Surprisingly, he's only the first defensive linemen to commit. Considering it's conceivable he could end up at OLB with his size and speed and Javarie Johnson's already left, I'd consider it possible to add another defensive end.

And props to bwm for getting this earlier in the day.