Share All sharing options for: The ACC and TV Talk: ESPN Bound Again? 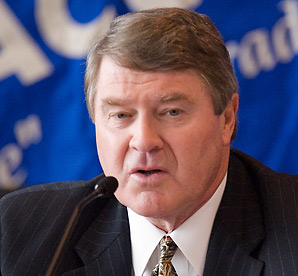 Y'know what's really behind the conference expansion stuff, right? It's all about money. And one of the biggest money producers for athletics? Television. And the ACC, of course, has just begun to negotiate for a new television deal, seeing how the current one runs out in 2011. Perhaps that explains why the entire issue of realignment is one that is of particular interest to us.

This topic is not new; I've discussed it in detail before. The SEC rules the roost thanks to an unbelievable deal with ESPN. The Big Ten is a close second and may soon overtake the SEC if their very own Big Ten Network catches on like they hope it will. The ACC's contract, which is with ESPN and the utterly laughable Raycom, is probably the worst deal of the major conferences, though it's all about equal past the big two.

Unsurprisingly, getting a better media deal has been priority #1 for the ACC; almost nothing will produce as much revenue to be shared about member schools than a hefty TV contract. Shakin' the Southland overviewed the ACC's options today; I highly recommend the read to get caught up to the discourse. They mention the possibility of the ACC starting their own network, staying with Raycom, or maybe splintering off to a bigger group. Fox is discussed most prominently, though NBC - which was recently purchased by Comcast - could be a better fit.

It hasn't been (and won't be) an easy task. The ACC isn't exactly a powerhouse of a league right now; it's arguably the worst BCS football conference around right now despite its massive potential (GT, Clemson, VT, FSU, and Miami makes a pretty strong conference) and the Big Ten is catching up in basketball. Though nothing can match the power of Duke-North Carolina, they play just twice a year and have the biggest appeal outside of the biggest moneymaker: football. The ACC is worst at the one thing that produces the most money, so they're also short on leverage.

Expecting a good deal without at least some sort of outside-the-box thinking is probably expecting too much. That means going to new networks (like Fox and NBC), exploring the possibility of an "alliance" along the lines of what the Big 12 and Pac 10 may be setting up, creating an ACC Network, and possibly something else that someone who is paid to be better than me at these things cooks up. That would not include going to ESPN and Raycom, who offer 1) limited coverage, 2) limited financial benefit, and 3) an inferior product, in the case of Raycom.

Unfortunately, that outside-the-box thinking didn't appear to take place, or at least failed miserably. Mike Gminski (way to put "Duke" in your Twitter username, Mr. Unbiased) tweeted today that "ESPN is a lock to receive the ACC television rights." This doesn't preclude the possibility that ESPN ended up overpaying for the right to broadcast their games, nor does it mean that ESPN will 100% get those rights, but it's a bad omen. The Worldwide Leader is already paying out the nose for the SEC rights. The odds that they'd be able to give the ACC - a conference with significantly less earning potential - a competitive deal seem long.

I'm not blasting the idea entirely - after all, these people are paid to be smarter than me at this - but John Swofford has a history of questionable decisions and this didn't qualm them. Maybe the deal will be better than expected. Maybe the other possibilities never panned out (I'll just say that was a very quick decision if so). Maybe this was just the best possible route. Any way you slice it, it's far from encouraging.

The huge secondary impact this has - perhaps it won't even be secondary, if everything splits right - is in regards to expansion. If the deal is as poor as expected, the ACC will need revenue bad, and that means potentially adding some of the teams that the Big Ten leaves out. There might've been little reason to expand before, but if adding Syracuse and Pittsburgh - two obvious additions, as I see it - could dramatically increase revenue or at the very least cause a reworking of the TV deal, there is plenty of impetus.

Oh, and if the increasingly prominent Maryland talk turns out to have legs, then the ACC certainly did nothing to help their cause.