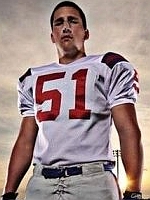 Settled in at home, and I'm in the process of adding Maryland's latest commitment, offensive tackle Ryan Doyle, to the database. Before that happens, though, I'll do all the heavy lifting here.

First off, the most useful thing when looking at Doyle's game is video of him, which MaxPreps thankfully has - he's #51 in blue. The first thing that will jump out at you is that he certainly looks his size (6-6, 265), which is on the skinny side for a tackle. Past that, though, he's extremely nimble and looks like he held his ground very well. He has a big frame and will certainly add some weight/muscle in College Park, which will keep him at an even level with the rest of the ACC. As long as he stays that nimble, he'll be a big asset.

Luckily, the video isn't lying - he's described as ($ link) "very athletic" and able to run well. Team speed is being upgraded everywhere, apparently not just on the defensive end. The OL Maryland has been recruiting recently should be able to keep pace with the rest of the burners on the team. The Terps might not be especially strong, but, ironically, they'll be able to beat most teams in a race.

Maryland was Doyle's only offer, at least according to the Big Three of ESPN, Scout, and Rivals, but he had interest from a variety of other schools, including Penn State, Alabama, and Florida, which bodes well. Considering some of the players that Maryland offered last year - again, not hating; some of those guys will turn out pretty good - Doyle's interest levels, even without any other offers, is a step up. He'll probably need a redshirt year to add some more weight, but his athletic ability means he could start down the line.

I have no idea what James Franklin and Ralph Friedgen are telling recruits at practices and how they're conducting them, but they're evidently doing something right. Doyle cited the atmosphere as a major reason why he committed, going so far as to call it a "championship program." I'll take that. He's probably more optimistic than I am (though Franklin is obviously a recruiting monster).

As for the future, that's the second OL Maryland has landed. Both of them are tackles, so it's safe to expect one or two more commitments at guard or center. The majority of the rest of the commitments, however, will probably come on defense and especially the skill positions on offense. Fun stuff. Lots of highlights.