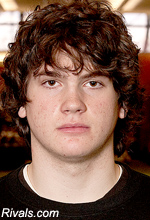 InsideMDSports has the good word via Twitter, and his Rivals profile confirms by listing him as a Maryland commitment. Farrand, who stands 6-2, 233 pounds, doesn't have the name or ranking cachet that King carried and is a throwback to "Maryland was his only offer," but he did have interest from Connecticut, Iowa, Rutgers, Virginia, and Wisconsin.

For those of you keeping score at home, that's commitment number nine for Maryland, and the speed with which the coaching staff is moving is both shocking and encouraging. I'm not sure why they're moving with such urgency - a variety of reasons, like attempts to salvage their jobs or simply taking all comers with last year's season in mind, are possible - but that they've done it and also managed to wrap up a recruiting class  that looks, quite frankly, better than it did last year is a pretty big testament to whatever they're doing and whoever's doing it.

Farrand marks a return to northern recruiting after a string of southern commitments - surprisingly, he's the first Maryland commitment from north of the Mason-Dixon line, and just the third from north of North Carolina. I'm certainly not complaining, but it's good to know that they still know the north exists.

Now, to the tape, which has him at tight end before switching to his perhaps primary LB position.

I actually liked him at tight end a lot; he sort of reminded me of Joey Haynos as a good, solid blocker with good hands and the ability to be involved in the offense. He's not Vernon Davis, but he caught the ball nicely and isn't lumbering, which is enough to be a tight end when combined with solid blocking. He might be on the small side for a TE, but he pancaked a DT and showed that he at least looks stronger than one would expect.

He's listed as a linebacker, though, so that's what I paid more attention to. I'm not particularly sure I liked him better at LB than TE, but that's for the coaches to decide. He didn't look all that fast, but he got from sideline to sideline when RBs tried to stretch plays out, and even ran down a TE or WR once, which I didn't expect. It's a cliche, but yes: deceptively quick. The highlight reel showcased him taking good angles and some solid, wrap-up tackling. That is why they call it the highlights, of course - I'm not expecting them to show a ton of missed tackles and bad angles. But I digress. He seems a solid linebacker that won't make mistakes and has the speed to see the field.

So tomorrow's Blake Countess, then Darius Jennings, then Cyrus Kouandjio, right? Even if it isn't, this haul has been unexpectedly good.