As I type this, Duke is demolishing UNC by more than 20 points. I think it's fairly safe to assume that the game's in the bag. It's entirely possible that this is a Dewey Defeats Truman moment, or that my foolproof blogger jinx strikes again, but it's exceedingly unlikely right now.

Maryland clinched a share of first place with their win over Virginia today, but they needed Duke to lose to win it outright or receive a #1 seed in the ACC tournament. With that not happening, the Terps are now locked in as a 2 seed in the tournament, and the bracket has begun to take shape. The bracket is after the jump, using scenarios from the awesome Patrick Stevens: 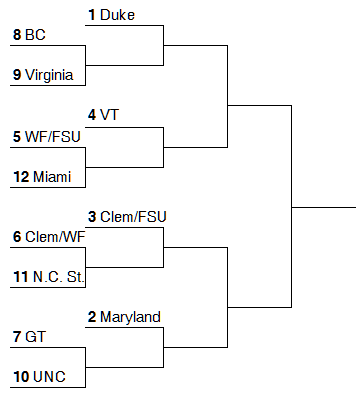 A little convoluted at spots, but Maryland will for sure get the winner of Georgia Tech and North Carolina, two teams they have already beaten. Georgia Tech is definitely a scary matchup, because Maryland needed a last second shot to win at their home court. Maryland has improved since then and played somewhat poorly the first time around, but it's still concerning. Hopefully North Carolina can pull off the upset and give Maryland a slightly easier opponent in the first round.

After that they'd play either Clemson, Wake Forest, or Florida State. If Wake beats Clemson tomorrow, FSU will be the three seed and Clemson will be the six seed. If Clemson beats WF, then Clemson will be the 3 and WF the 6. I'd like to avoid FSU if only because it's tough to beat the same time three teams in once season, but I admit that it's tough to ignore the fact that Maryland has beaten them twice, both home and away. I would definitely like to avoid Clemson - they gave Maryland trouble at the Comcast Center and won on the in Littlejohn fairly comfortably. I'd be pretty confident if Wake Forest were to get the 6 seed and was able to upset Clemson in the second round. Maryland has gotten better since the first matchup, Wake has gotten worse, and it won't be in Winston-Salem.

Interesting little fact here: Greivis Vasquez, Eric Hayes, and Landon Milbourne were part of a team that closed the regular season on an 7 game winning streak before. Their freshman year, in 2006-07, Maryland finished with seven straight wins. What happened next? They lost in the first round of the ACC tournament to Miami. Of course, Maryland has won 7 straight this year, too. Be vigilant: they definitely seem tired from the stretch. The senior leadership is better than it was in the 06-07 team, so I think they'll be okay (actually, I think it's more likely they win the ACCT), but it's a possibility they struggle early.

I'll post the final bracket in a FanShot when it's decided tomorrow. Until then, discuss.