Could This Be the Best Game Ever at Comcast?

Share All sharing options for: Could This Be the Best Game Ever at Comcast? 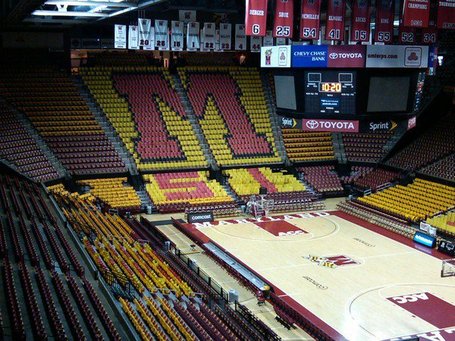 First, I wanted to show you what Comcast will look like tonight. A few friends of mine back when I was in school started a ground called Byrd's 11. They placed that giant "We MUST protect this house" banner in Byrd before the FSU game in 2005 (that we won, btw). And they've worked to have a number of cool things done for the Duke game this year. As you can see, there will be a giant block "M" on the wall and the lower portion of the wall will have a "1" and "5" for Milbourne and Hayes and the sections surrounding the court will have "21" on each side for Greivis. It's going to be insane. Thanks to my friend Joe Dacey for the photo.

Tonight, It's Duke. It's Senior night. It's for a chance at the ACC Title. And it's the last game for one of the best players to wear a Maryland uniform. All of these factors add up to this question - could tonight be the biggest game in the history of the Comcast Center? I think if Maryland wins, the question answers itself. But going into tonight's game, has there been a bigger game in the young arena's history? Here are some of the top moments at Comcast (in my opinion) since it opened it's doors in the 2002-2003 season. These are in chronological order...ranking them is an entirely different subject...probably one we'll touch on in June when we're in our yearly Maryland Sports drought.

January 18th, 2003 - Maryland beats previously undefeated and #1 Duke, 87-72, overcoming a halftime deficit of 6 and turning it into a 15 point win, behind 24 points from Drew Nicholas.

February 17th, 2003 - The original snow game. After a huge snow storm, the game against #11 Wake was delayed a day and then played in front of mostly just students, as no one else could get to Comcast because of the large amounts of snow outside. Maryland blew out Wake 90-67.

February 12th, 2005 - Maryland beats #7 Duke 99-92 in overtime. In what was probably the highlight of the season (Maryland missed the NCAA's that year), Maryland beat the Devils in OT, outscoring them 11-4 in the extra session. John Gilchrist was one assist shy of a triple-double.

February 27th, 2005 - Maryland loses a heart breaker to #2 UNC, 85-83. The Terps made a big comeback but Sean May slapped away Mike Jone's last second shot that would have tied it as time expired.

January 19th, 2008 - BOOM makes a shot that put MD up by 2 with a few seconds left and Maryland defeats #1 UNC 82-80.  Oops. While this was a great game, it was noted that I incorrectly placed the game in Comcast when it was in fact in UNC.

February 21st, 2009 - Vasquez records a triple-double in an OT win against #3 UNC. The win propels Maryland into the NCAAs and is vindication for Gary Williams, who had been widely criticized about a number of issues, especially in a bush-league three part series written in part by Steve Yanda at the Washington Post.

So where does tonight's game rank? If Maryland loses a close one, do you still give this a high ranking in terms of it's hype and importance? If the win, does this have a chance to be your #1 game in the history of Comcast? As I went through all of these games, I found some great memories. And I realized that Gary is pretty good at defeating Roy. And while some of these games were losses, I think they were still great games. The upset of #1 Duke was good, the many upsets of UNC were awesome too, especially last year. I think right now, that game against UNC last year might be my top moment. So much was on the line, the players and Gary had been dragged through the mud by the Post and on message boards, and it was just vindication that Gary is the best. And I love my some Gary Williams, so that made the win that much more special too. But I think tonight, because it's Duke, because of what's at stake and because it's Vasquez's last game, could move this one to the top of the list. But only if the Terps win.