As Greivis and Co. leave the house, others rise to take their place. This year, it's a group of five incoming freshmen. Over the next five days, we'll be introducing them to you, in order of their commitments. First up was Terrell Stoglin. Today, it's Mychal Parker. 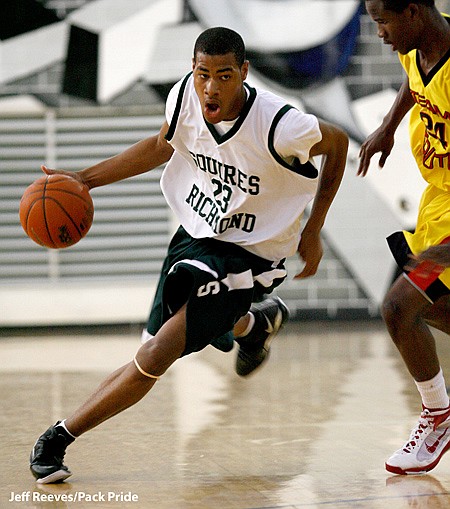 Name: Mychal Parker
Height: 6-6
Weight: 190
HS: The Miller School; Crozet, VA, by way of Washington, NC
AAU: Richmond Squires
Position: SF
Nickname: Mike. Or, rather, Mych. However, if he gets #5....wait for it...MP-5. Someone get to Parker and tell him this.
Rankings: 4 stars on Rivals, #11 SF, #53 overall; 95 on ESPN, #12 SG, #44 overall; 4 stars on Scout, #12 SF, #64 overall
Maryland Was Better Than: Clemson, Florida, Miami (FL), UVA
Strengths: Smoooooooooooth. Everything about Parker's game offensively is just so fluid and natural. His frame/size is perfect, he can get into the lane nicely, and is athletic enough to get up for big dunks and finish through traffic. Some of his dunks will bring down the Comcast Center. Just dunks everything. Has good handles, which enables him to attack the basket aggressively. Can rebound well on both sides of the floor. In a way, he's kind of what everyone wished Landon Milbourne would be when he came to College Park (not a knock on Landon - he was wonderful, but different than what we expected). He can really score from anywhere. He absolutely has star potential, which is unusual for Maryland wings.
Weaknesses: In terms of his game, Parker's pretty complete. His jumper from long and mid-range, though improving, is still very streaky, but it's not by any means a dealbreaker. The biggest scare has to do with his competition level in high school, which was less than ideal (the Blue Ridge area doesn't produce much in the way of D1 prospects). That could mean anything from a long transition period to overrated skills, or it could mean absolutely nothing. There's another concern, though much less concrete: he's on the inconsistent side. It could be a mentality thing or just inexperience, which would be expected to a point, but I've heard more than usual (for instance, his coach's comments, or ESPN talking about "urgency and aggressiveness", a newspaper article from a year ago that has seemingly disappeared that said he could be "top 10 with more consistency", etc.) I don't know him personally, so take it for what it's worth.
In a Turtleshell: He's supposedly a bit inconsistent in terms of "bringing it", but he is incredibly smooth, extraordinarily athletic, and has every tool needed for a wing to thrive. Maryland hasn't had a great wing player in a long time - hopefully Parker is the next.
Interesting Storyline: Eric Prisbell promised a long, hard look at AAU ball in return for his hack job on Gary Williams. The result? A story on Parker, a heavy Maryland target and future commitment for having a "handler". So it continues, Washington Post. So it continues.
Comparison: A less well-rounded Evan Turner. No one as is smooth as Turner, but Parker comes close. He just doesn't have Turner's inside ability, nor point guard instincts. Devin Ebanks without the jumper. His coaches have thrown out Ray Allen and a shorter Tracy McGrady as possible comparisons.
Prediction: Parker has the ability to be the best out of this class for Maryland. There will be plenty of competition on the wing, though, so if his mentality is what some have said, playing time won't come easy. I don't have him starting this year, but instead seeing inconsistent playing time before figuring out how he needs to approach the game. Once that happens, he can become an elite wing.
Other Useful Links: Rivals | ESPN | Scout | Terps Got a Steal