Share All sharing options for: Maryland Football Spring Practice Kicks Off Today, Which Means So Does Torrey Smith's Heisman Bid

The first step of the healing process starts today - we now have a new sport to talk about, and as little hope as there might seem at first glance, every team starts 0-0.

It might be tough to get excited about anything, particularly football, but there's plenty of intrigue in this spring practice - everything from recruiting momentum to Ralph Friedgen's job security to dozens of position battles will occupy the headlines for weeks to come.

Position battles will be especially interesting. I'm currently in the process of writing a series of overview posts for them, and there are some interesting ones. But I think one thing takes precedent over all else: 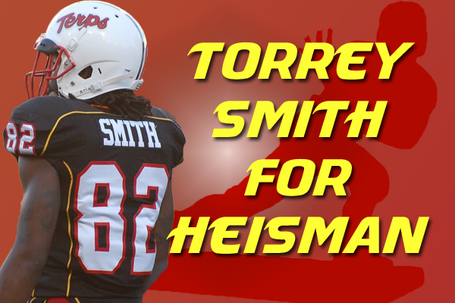 Who's with me?! For a good majority of last year, Torrey Smith was the nation's leader in total yards, and that was with a QB with a broken rotator cuff and an offensive coordinator that recruited during games (not saying I don't love it). As Franklin and Friedgen begin to work together to create a coherent offense and Jamarr Robinson (or C.J. Brown or Danny O'Brien - more on that later) figures out the QB position, Torrey Smith is poised to take the NCAA by storm. And that's not including the fact that Torrey has clearly been working out in the offseason.

I'm calling it now - Torrey is the darkhorse Heisman contender for the season. We'll be brining you updates on his greatness regularly, along with the traditional team-focused stuff.

Hey, I gotta get through this season somehow.

I have undertaken step one. Your move, athletic department.