Share All sharing options for: Adjehi Baru Commits to College of Charleston...Or Doesn't 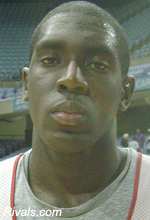 The Adjehi Baru recruitment has always been a little...funny, but it's never really descended into fullscale "circus" status. Until, perhaps, now. That's because Baru - a top-flight center, five-star prospect, and Maryland's largest remaining target - might have just committed to College of Charleston. Or might have not.

Evan Daniels, Scout's leading recruiting analyst, broke the news on Twitter, saying that "2 sources have confirmed that Baru is headed to College of Charleston," after mentioning that he had heard rumors that Baru had committed. He then deleted the tweet (the screencap linked above is via Terrapin Station).

Dave Telep, now ESPN's leading analyst, followed up with a tweet claiming that Baru hasn't committed and doesn't plan to do so anytime soon. Daniels recently tweeted that Baru's recruitment has "been one of the more weird ones I've ever tried to cover."

As of now, Baru remains uncommitted, at least officially, what with Telep's tweet and the unofficial retraction of Daniels'. But it's pretty obvious that, unless there's a major upset, he's a heavy CofC lean, if not straight-up committed right now.

That means that Desmond Hubert becomes nothing short of crucial for Maryland's chances. Past that, Gary Williams and Bino Ranson need to start hoping that a top-flight big either decommits from elsewhere or pops up out of nowhere from overseas or a junior college. But more on that later, probably once Baru makes it official (if he ever does).