You Tell Us: Are You Drinking the Terps Kool-Aid?

Share All sharing options for: You Tell Us: Are You Drinking the Terps Kool-Aid? 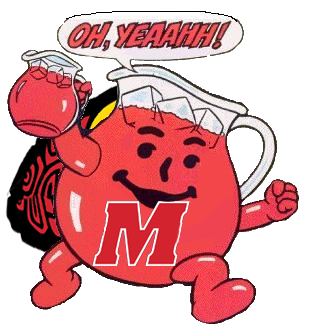 Commenter BaltimoreSportsFan brought it up in the GameThread, and there's a valid question there that's deserving of a valid discussion, so I'll ask it again, paired with this semi-humorous Kool-Aid Man with a lopsided shell you see to the right: are you drinking the Terps Kool-Aid?

After the 48 point victory today, which gave the Terps bowl eligibility and put them near the top of the ACC, there may actually some high hopes in College Park now. Whether or not there should be is a different matter.

Do you see Danny O'Brien's 7 TDs in the past three games, the two dominant defensive performances, the 6-2 record and the fact that Maryland's currently and inexplicably in a virtual tie for first place with the two remaining teams they're tied with - N.C. State and FSU - still on the schedule? Do you see Maryland dropping an ACC opponent by 48? Do you see Kenny Tate, the potential Thorpe candidate, and Torrey Smith, a slowly resurging deep threat? Do you see Maryland as "for real" and a legitimate contender for the ACC title?

Well, which is it? I won't tell you my opinion (yet), but I'm interested in seeing the results. Essentially, this question is: do you think Maryland is "real" or not? Do you buy them as a legitimate, upper-middle or middle-middle ACC team? Are you drinking the Kool-Aid? (For the uninformed, drinking the Kool-Aid means becoming a firm believer in something, even if it's perhaps baseless).