So, Terps' New Basketball Jerseys Have "Maryland" in Script

Share All sharing options for: So, Terps' New Basketball Jerseys Have "Maryland" in Script

Even though Maryland's new basketball duds already got a semi-official reveal, we had no idea of exactly what the black or gold versions would like, except for those people that assumed that they'd just be the normal jerseys in a different color. Well, those people were wrong.

The basketball players wore the black versions for their dance at Maryland Madness on Friday, which was our first look at them. For those of us watching on TV, that "look" accounted for little more than a 3-second shot from CSN. But now there are photos, and they reveal an interesting twist: "Maryland" is in script.

I didn't notice it until aMo posted a FanShot with the below image: 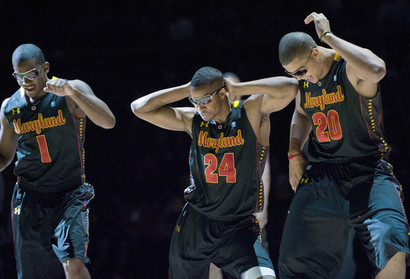 Besides Cliff Tucker and Jordan Williams awkwardly dancing, you should notice that the "Maryland" isn't blocky and normal; it's in script. And I gotta say, it's pretty sweet.

Another view, from Maryland's official gallery: 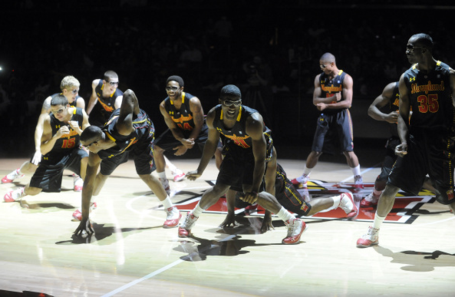 You can't really see the script too well except on Padgett (and a little on Pe'Shon, Mosley, and Stogs), but I figured I'd do some sort of actual contributing to this article of my own.

I haven't seen the gold unis yet - and they'll probably have a normal script - but these are the front-runners for the best looking unis Maryland has. I was skeptical from a distance, but the up-close views won me over. Now, whether or not they actually wear them - the last time the Terps donned black, they got rocked by UNC - is still up in the air; Gary Williams seems both old-fashioned and superstitious, so they're doubtful.

But wow, those are some sweet-looking unis.