It's no secret that Maryland is pretty abysmal on both the offensive and defensive lines. The obvious cause of this is deficient recruiting, right? That's what I had always assumed, but I never really realized just how deficient it was.

Take the following graph, which shows how many offensive and defensive linemen have been recruited in each year: 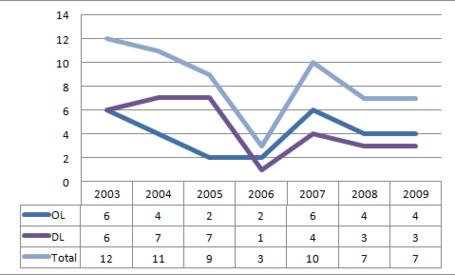 Twelve, eleven, nine, three, ten...wait, THREE? A total of three linemen in 2006? No wonder the lines are so bad. Oh yeah, forgot to say, none of those guys should even count in my totals - Bruce Campbell would prep and become 2007, Evan Eastburn transferred to Colorado, and Brian Whitmore had academic trouble. So, uh, 206 saw basically zero linemen. Nice, right?

Not so much. While Campbell did come in that year, Bearthur Johnson would have academic trouble, Tyler Bowen would be constantly injured, and Steven St. John, Maurice Hampton, and Joe Faiella all saw minimal development. It's the same story for the four DL - Dion Armstrong transferred/dropped out and Ian Davidson, Carl Russell, and Joe Vellano have all had almost no playing time. Here's another view of the same data; the only change is that people who transferred/dropped out or prepped are now taken out or changed years. It's a bit worse: 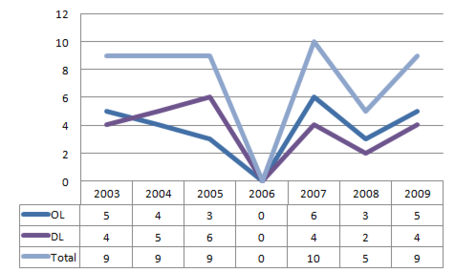 Linemen recruiting started to pick back up in 2009, so it's time to hope that those guys stay in College Park and make their expected impact. Still, I'm of the opinion that too few guys are being recruited, even now. There's no coincidence that three years after 2003, Maryland's most successful line recruiting class, they went 9-4. The next two years they went to a bowl, too. Seven linemen ain't perfect, but it's better than 2006.

2006 was the staff's fault, 2007 was a bad break - regardless, those two years are the reason Maryland is seeing the problems they are. Thought this was an interesting study, and shows how important line recruiting is.

In case you care, the 2010 class has two offensive linemen and five defensive linemen - not bad, considering how few scholarships Maryland has. Any thoughts on the topic?