It's That Time Again: Pick Your 2010 Dream Class

Share All sharing options for: It's That Time Again: Pick Your 2010 Dream Class

It happens time and again - we ask you for your favorite possible 2010 basketball recruiting class. This is an especially good time to ask the question, seeing how we just published our updates on the 2010 prospects (guards/wing and big men).

Remember, Maryland already has Terrell Stoglin and Terrence Ross committed for 2010. For roster balance's sake, it'd probably be a good idea to not pick any more PGs or SGs. If you're wondering what the roster will look like in the future, here's the breakdown, assuming no attrition. 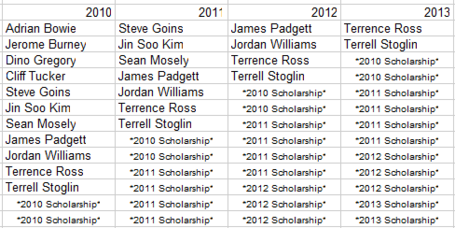 Personally, I'd love one of two options: 1) Roscoe Smith and a legit big man, like Jon Graham or Hippolyte Tsafack, or 2) two tweeners, giving us interchangeable options at the 3 and 4 spots. For option #2, I think I'd most like Terrence Jones and JD Weatherspoon, but CJ Leslie would be a huge get as well. I'm slowly cooling on Tobias Harris, for whatever reason. I actually think I would prefer option #2 to option #1, simply because it would not only create matchup problems, but it would allow us to matchup better with opposing teams, depending on what their roster looks like.

Alright, who do want? Mychal Parker and Jon Graham? How about CJ Leslie and Tobias Harris? Let's get some discussion going in the comments.