Who Are These Guys: Terps 2010 Big Men Recruiting Update

Share All sharing options for: Who Are These Guys: Terps 2010 Big Men Recruiting Update

In a follow-up to probably our most popular pair of posts, we've expanded and redone the "Who Are These Guys - 2010 Prospects" in light of several new recruiting developments. Below, you'll find vital info, rankings, and scouting reports on every major target for Maryland's 2010 class (no, we didn't watch everyone play, these are summarized from other reports, articles, videos, etc.). That's not to say these are the only guys on the board - they're not - but they are the biggies, at least right now. This is the second of two posts, the first being the guards and wings reports. Make sure to check that one out too, if you haven't already. The first of the reports is below, the rest of are past the jump. Enjoy.

Vital Info: A late bloomer, recently getting high major looks. Son of former Terp Ernie Graham, which could cause some problems - Ernie felt very slighted by Maryland during his time in CP, as he believed he was used incorrectly, and isn't a Terp fan at this point.

Strengths: Always gives full effort, plays with passion. Very competitive. Decent midrange shot that makes guys think twice about leaving him open in the 15 foot range. Good rebounder. Glue guy who does the dirty work and little things to win. Wants to be a Terp, by all accounts. Still growing, and getting bigger in the weight category, too. Tough and gritty. He outworks more naturally gifted bigs.

Weaknesses: Can still get muscled around by bigger players. Has had trouble in the post due to his lack of strength and lacks the post moves to overcome that yet. So so athlete. Average defender at best. Hasn't been performing at a high-major level most of his HS career. Low ceiling.

Red Flags: Does seem to be any off the court/behind the scenes issues, but his dad Ernie may have some qualms there. Although If his son really wants to go to Maryland, it would be hard seeing him forbidding it.

Comparison: Let's see - Baltimore product, gives full effort, does the little things, nice jumper, but needs strength and generally lacks a post game? Yep, that's Dino Gregory in a nutshell. Also similar to Dante Cunningham from Villanova. Both were "gritty" high schoolers with a great work ethic. Cunningham transformed himself into an NBA draft pick through hard work; can Graham?

Odds: Pretty good. Graham wants to be a Terp, by all accounts - Maryland might be a dream school of sorts. The Terps need to want him first, though, and probably need to overcome some issues with his father. 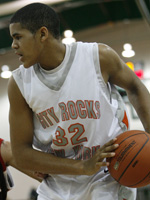 Vital Info: Been on Maryland's radar for awhile. Combo forward who's been a top 20 prospect for a long time.

Strengths: Nice shot for a big man. Has a complete arsenal of offensive moves. Has range that extends past 3 point line, which combines with his midrange jumper and inside game to make him a big threat. Most polished big man on Maryland's radar. Can penetrate the lane and finish a with either hand, while drawing a foul in the process. Solid, smart rebounder. Athletic enough to get out on the break and run the floor well, which bodes well for Gary's flex offense. Has gotten stronger and lost some weight. Attended the Amare camp (for big men) instead of the Pierce camp (for wings), so maybe he recognizes he's a 4.

Weaknesses: Another face-up four. If he doesn't grow, he's undersized for a four man. A tweener with a 3's mentality. Little in the way of low post moves. Not athletic the way Roscoe, Jones, or Leslie are. Still needs to add strength and slim down. While he has all the offensive moves, his lack of elite athleticism hinders him a bit. Has been labeled as soft before. Okay defender, but not elite. Struggles against big men in the post.

Red Flags: None really that jump out. Possibly having the ability to drop some weight once in college.

Comparison: A less athletic James Johnson. Both have some weight issues, both have range, both are tweeners with the mentality of a three. Johnson is just more athletic, and Harris has more range.

Odds: Tough to call. Tobias wants to visit and likes Maryland, by all accounts, but drawing NY players is tough, especially when there are a lot of Big East schools involved, like there are here. I do think Maryland will make it down to whatever his final cut is, but I don't think he's that big of a priority as he was previously.

Vital Info: Originally committed to North Carolina State but reopened recruitment in March. Originally, the Terps were only connected through speculation, but lately it's been revealed that Maryland is heavily involved in CJ's recruitment.

Strengths: Athletic freak. Amazing hops and faster than expected. Good height and even better wingspan. Nice midrange jumper, and can occasionally extend out to the three point line. Can put the ball on the floor and get to the hoop. Specializes in highlight finishes around the rim. Runs the floor well. Great rebounder due to his size, leaping ability and effort. Knows how to start the break after grabbing a board, again good for Gary's flex. Very good defender - has the length and athleticism to be an elite shot blocker, and the quickness to guard 3s on the perimeter. Insane potential. Would fit in well with the smallball approach if stays a 4.

Weaknesses: Needs to add strength and weight. Has the height to be a four, but needs weight and may fit better as a three - definitely a tweener. May even want to be a 3 in college. Doesn't have a real post-up game yet, though he can get by facing up most times. Doesn't always do the little things to win. See the Red Flags section, too.

Red Flags: Maturity, focus, effort, and consistency have all been concerns in the past. Because of this, there are questions on if he'll ever reach his full potential.

Comparison: Austin Daye out at Gonzaga - great talent, but way too skinny. More athletic than Daye, though. The highlight reel compares him to Kevin Garnett, and while I don't think he's that good, there are some similarities in their games. Physically, he recalls Marvin Williams, but his game is more complete than Williams' was.

Odds: Alright. CJ was supposed to visit Maryland last week, and he's listed the Terps ever since decommitting from NCSt. That's not to say the Terps have any more than a 10% chance at this point, but it's not quite an impossibility. 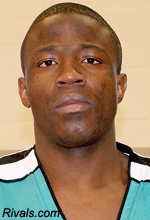 Vital Info: Tsafack has only been in the US for a few years, arriving from his native Cameroon in 2007, but he's gotten some serious attention. Maryland was the first high-major to contact him, as well as the first school he visited and the first game he watched on TV. He hasn't received an offer yet, but one would think that it's on its way.

Strengths: Ridiculous potential. Hippo's body is as chiseled as they come, and he could get even bigger. An amazing athlete - much faster and has a much better vert than you'd expect from someone so muscular. Has a great motor and hustles. Ferocious rebounder and dunks with reckless abandon. Also an above-average shotblocker.

Weaknesses: Still very raw on both ends, without a doubt his biggest weakness. Still learning the game, so he's well behind most other prospects at this level. Because of the relative newness of the game to him, his basketball IQ isn't that great. Has very few post moves outside of a bull push. Shot isn't pretty. Can rack up foul shots, but he'll brick most of them. Not a threat outside of 7 feet.

Red Flags: Ability to continue to learn and develop as a player. As he's a foreigner, there's an increased chance he could be hijacked by "handlers" or "mentors" (think Ater Majok).

Comparison: Does anyone else think of Boom Osby when you read his scouting reports? Let's see - raw, not a great shooter, but built as can be, great motor, and strong rebounder and dunker? I think he could be a more athletic Boom with a higher ceiling.

Odds: I'd say they aren't bad right now. Maryland was the first team on him, and the Terps were the first basketball team he knew of after setting foot in America. There's that chance he becomes Ater Majok, but right now the Terps are okay.

Images from InsideMdSports, Scout, and Rivals