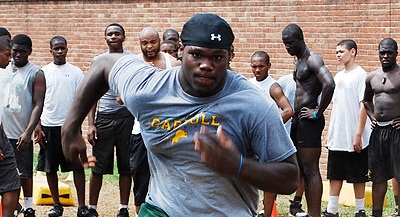 ESPNRise has this to say on newest Terp Nate Clark: He's a man-child
They list him as a DT, which goes against everything else I've heard, but it's good to hear regardless.

"He had the demeanor about him. I told him he's going to be a man-child," Houchens said.

"A credit to him, inside guys are usually just run stoppers. You don't get the average inside guy that is a real pass rusher too," Houchens said. "Nate really brings that special quality."

They do go on to say he could be OT or G.

Maryland wants to be hungrier this year - Sun
This year's mantra: be hungry.

Friedgen blamed himself Monday, saying it's his job to make sure players are prepared. But he also suggested that motivation was an issue for some of the experienced players. Last year's team had 30 seniors.

Without mentioning names, Friedgen described some veteran players' attitudes by saying: "Coach, I've been there. Just chill." Friedgen, 62, said he would have appreciated more urgency. He said this year's team, which returns just 10 starters and is much younger, seems "hungry."

Anyone else find it ironic that as Friedgen loses weight, we're getting hungry?

Okay, with the corny joke out of the way, I wonder who the vets were. My first thoughts were Covington, possibly Philistin, possibly Oquendo? I don't really know, but that's an intriguing comment.

Friedgen chews fat, only figuratively
Okay, so it's completely about his weight. It's a good puff piece...I mean, story. Anyway, this was important to me:

Friedgen's ultimate but unlikely goal is to drop 150 pounds.

Regardless, he plans to keep the weight off for good this time. And he doesn't need a scale to tell if he's winning this battle.

"Going on a diet is like keeping score," he said. "I used to weigh myself every day. Now, it's maybe once a week. But I've gotten to the point where I can tell from my clothes whether I'm losing weight."

Good to hear he plans on keeping it off this time. I remember the last time he did it, he gained it all back. I had been wondering about this, so I can sleep easy at night now. Oh, and it would be amazing if he lost 150.

Memphis, Kentucky, Florida and UCLA are also trying to get involved.

Harris and his father say they will cut the list in August and reward those programs that have been most loyal and whose head coaches have been watching him in person.

I guess we'll know how honest he is if any of those schools are on the list. That statement keeps giving me hope, though.

PFW - Heyward-Bey looking to quiet critics
This is one of the few positive pieces of the article:

"[The Raiders] chose a guy who fit what they're trying to do, and for me there's no added motivation," Heyward-Bey said. "If I was the first pick in the draft or the last pick in the draft, I was going to come in and do the exact same thing: work hard and just be the best player I can be. I can't worry about what people are saying out there in the media."

Other than that, it's almost a DHB-hate fest. There's about one or two more paragraphs positive for him - and one of them is a Ralph quote.

Regardless, the better DHB does in the pros, the better for us. Ralph treats him like his son, and he probably sees Ralph as a father figure of sorts. Unlike Shawne Merriman, he could do wonders for our recruiting.

MaxPreps 2012 Top 100
Okay, it's very, very early for this, but if you're wondering who to watch in the future, these are the names (of course, they're all probably "entitled athletes"). All the players from Maryland:

Certain football attributes can be learned. Others can be refined and improved. When you’re talking about how fast Potomac sophomore Ronald Darby is, it’s safe to say that his speed simply cannot be taught.

Darby finished second in the state in the 100 meters. He was clocked as fast as 10.73 in the event. Darby has one of the fastest times in the nation for his grade.

His speed should allow him to shine at running back or in the slot for Potomac in 2009 while college coaches continue to keep close watch.

Good Counsel was blessed with the likes of Jelani Jenkins and Caleb Porzel last season—two major difference makers on the prep scene. What’s frightening for other WCAC teams is that Bob Milloy’s squad will return Stefon Diggs in 2010 along with a host of other standouts.

Diggs saw action on wide receiver and defensive back for the Falcons. He was also valuable on special teams, where his quickness allowed him to excel at returning punts.

A teammate of Diggs’, Wesley Brown, will also be heavily recruited in 2012. His speed should allow him the chance to replace Porzel at running back for the 2009 season.

The 6-1 Washington guided the Warriors to eight straight wins and an 11-1 record on the season. He finished with over 1,000 yards passing and 17 touchdowns.

Though Havre de Grace is a small 1A school, Brooks expects Washington to be heavily-recruited by Division I schools. That shouldn’t be a problem if Washington continues to build on his remarkably successful ninth grade campaign.