Everything You Need to Know About Matt Pilgrim

Share All sharing options for: Everything You Need to Know About Matt Pilgrim 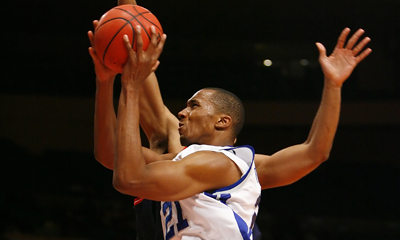 So, Maryland is looking at transfer prospect Matt Pilgrim (and vice versa, obviously). While I wouldn't get my hopes up, it only stands to reason that we should actually know who he is. He is, after all, a Terp target. I mean, if we do this for DeShawn Painter, we might as well do it for Matt Pilgrim.

Vital Info: Pilgrim was at Hampton for his first two years, but impressed a lot of people and transferred to Kentucky. After sitting out a year, the HC who recruited him - Billy Gillespie - was unceremoniously kicked out the door. In turn, John Calipari kicked Pilgrim out the door, giving him the option of sitting the bench and getting 0 playing time or transferring out - for all intents and purposes, he was cut. He would normally have to sit out a year, but an NCAA waiver is expected, because he was kicked out of his scholarship by the coach. This would mean he'd be a junior and able to play next year.

Strengths: Forward with excellent versatility, has the ability to pass and handle plus face the basket or go inside Pilgrim has a good feel for the game ... He has active hands and has a real presence on the floor when he decides to play .... His stroke has vastly improved since he got to college ... In high school he was very much an inside banger, who has developed a good face up game and 3 point shot. His athletic ability is above average ... Can play with anyone in the country and dominate ... He is a terrific ball handler for someone who has played inside for so long. His long arms give him added size and make him a solid shot blocker and also rebounder ... Maintains excellent post skills to compliment his now improving perimeter game An excellent rebounder, especially for a small forward, who hits the glass hard ...

Weaknesses: As a high schooler he would play great for 5 minutes and disappear for the next 10, which explained why he was under-recruited ... He needs to develop consistency and play hard all the time ... He missed the beginning of the season due to a broken foot and has taken some time to get back up to speed ... He'll have one huge game followed by an average one. As he matures in college it could get scary how good he becomes at a mid-major with the style of play and the freedom to grow he has at Hampton ... To truly develop into a legit first round prospect he needs to hit the weights and commit himself to dominating every game ... Free throws need work, he has good form, but needs to develop a consistent routine at the line ... Shows good handle, but needs to become better at protecting the ball and limiting turnovers ...

NBADraft.net wrote that up and graded him in 2007. He would've been a freshman at Hampton then, I believe, and they rated him an 85. James Gist, for comparison's sake, was an 87 after his senior year.

Ok, so now that you have all that fun stuff, did UK fans like him? Well, that's up for debate. Some UK fans don't like him at all:

I really hope Matt Pilgrim gets a chance to play against UK because I think the kid needs an attitude adjustment. [snip] It was obvious from the get go that Matt wasn't the most pleasant of players but his recent comments lend creedence to the thought that he may have been a case of "too much attitude, not enough game".

The guy comes in a relative unknown from Hampton University, and all the talk is that he is a beast. Everyone that follows UK raved about his ability and claimed that he would have started if he were eligible last season. [snip] I heard another scout say that if he was coming out of high school right now, he would be a 5-star player.

Scott Padgett - yes, the former player...he's now an analyst - said Pilgrim would've been a starter last year at UK easily. For what it's worth, more UK fans seemed unhappy that he was leaving than pleased.

Want to see him in action? If you remember, two years Maryland played Hampton, and yes, Pilgrim was on that Hampton team. He played relatively well, though he wasn't spectacular. Here's the highlight reel for him for that game. He's got a nice shot, which is just about all you see in that highlight reel.

If you want to see more highlights of Pilgrim, here's a video of a Kentucky pickup game in which Pilgrim participated. If you just want to see Pilgrim and not have to listen to the guy's commentary, I suggest you start watching the clip at 4:40, then fast-forward to about 6:30, then see Pilgrim's finale at 8:30. The guy commentating the pickup game seemed to like Pilgrim, saying he is "athletic, mean, and a future NBA star. Well, maybe not star, but he can play in the NBA."

Now you know what I know. From the little that I know of him, I definitely like and want him. He's a big body who can take pressure off the freshmen bigs coming in, and play right away, possibly starting. Gary has very few good big men targets for 2010, so he wouldn't be robbing anyone of a 'ship and may actually help us with the tweeners like CJ Leslie and Terrence Jones. Especially considering Jerome Burney's health track record, Pilgrim is a guy that, if he wants to come, you take.