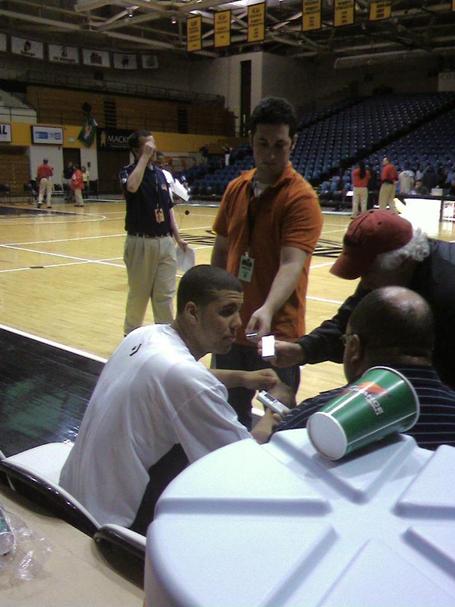 Ha! I finally get to credit myself for a photo. (c) - David Tucker

I was up on the campus of Towson University yesterday to watch the Charm City Challenge in person, getting my first in person view of 2009 Maryland commits James Padgett and Jordan Williams.  Another potential Terp, Terrell Vinson, also participated in the game. Many believe the four star Vinson wants to be a Terp, but the Maryland coaching staff is still going hard after Stephenson. If BR ends up somewhere other than College Park, look for them to make a push to land Vinson.

Team U.S. dominated team Baltimore, winning 112-86. Padgett was tasked with guarding Vinson, and did a very good job doing so. Vinson was unable to stop Padgett when they were matched up with each other. Padgett did a great job finishing/cleaning up missed shots, and was 11/13 from the field. The entire game was more about individuals running plays rather than setting up an offense in the half court, which allowed Padgett to get a lot of opportunities but also prevented Jordan Williams from getting a lot of looks. But Williams made his presence known on the defensive end and was a force inside that team Baltimore couldn't overcome. Williams was sometimes matched up with Oklahoma-bound Andrew Fitzgerald and did a fantastic job shutting down the big guy.

I was really impressed with how fast both Padgett and Williams ran the floor. Padgett got several of his points by hustling back on a fast break and scoring off a teammate's missed shot or after being fed the ball by a fellow teammate. Williams was good at getting back on defense and getting into the lane. It was also fantastic to see a player BOX OUT to get rebounds.

When the players for each team were introduced, Jordan Williams and James Padgett each got standing ovations for the crowd of about 2,000 who were on hand, which was really nice to see.

I came away from the game very satisfied, especially with James Padgett. He reminded me of a quicker, more athletic version of James Gist, but someone who does 90% of is scoring within a 3-5 foot radius of the basket.  I was really impressed with the size of Jordan Williams. Jordan looks like a sophomore or junior who's been in a weight lifting program for a few years. It's hard to believe this guy is still a high school senior.

The ACC was also well represented in the game, mostly on team United States; two players attending NC State; two one for Clemson; one for UVA; one for Wake; one for Georgia Tech; and one for Miami (although he was playing on team Baltimore).

I can't wait to see these two in a Terps uniform next year and it was great to get a preview of both of them on the court together for the first time.