[Ed's note: I've gone too far from my "Who Are These Guys?" posts to name it that, but it'll follow the same format.]

There's been an increase in interest in DeShawn Painter, a big man from Virginia who recently decomitted from Florida. I myself don't know too much about him, so I looked at a few scouting reports. I did learn that he used to be the #22 player in the nation according to Rivals, but has recently fallen very far. Here's the other stuff I found: 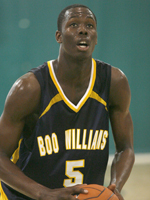 Name: DeShawn Painter
Height: 6-9
Weight: 200
High School: Hargrave Military Academy (Chatham, VA)
AAU: Boo Williams
Position: PF/C
Rankings: 92 on ESPN, #19 PF, #64 overall; 4 stars on Scout, #21 PF; 3 stars on Rivals, #18 C, #127 overall
Strengths: Painter is extremely athletic and has great leaping ability. Combined with his great length and wingspan, it makes him a great defensive threat and dunker. I've seen some insane dunks on his highlight reels. It also gives him a slight advantage in rebounding; he can leap above others to grab high rebounds. His midrange jumper is surprisingly good, going out to about 15 feet. He runs very well and is quick enough to guard the perimeter when pulled out on a pick and roll or run the floor. That he can run well is a nice bonus - that's a plus with Williams and Padgett as well, so hopefully we try to push the pace in the future.
Weaknesses: Painter is thin as a rail. That really hurts him down low and when rebounding. He's been able to get by in high school, but when he gets into the ACC, he'll see bigger, stronger defenders and will get pushed around down low. His post game isn't good enough to make up for a huge strength disadvantage, and neither is his rebounding ability. His frame has room for weight, though, so all is not lost. He just needs to have a lot of cheeseburgers and protein shakes, and get on a lifting program. Unfortunately, there are major concerns about his effort. During games, he's mostly consistent on defense contesting shots, but his effort tends to fluctuate in practice especially. He never really progressed the way he was supposed to, which is generally a sign of poor work ethic.

Comparison: Kinda reminds me of Robert Dozier of Memphis - tall, skinny, athletic. He'll need to fix the effort issues if he wants that kind of career, though.
Prediction: Well, he has all the raw skills to become a great player. Not too long ago, he was rated the #22 player in the nation, so the skills are there. One of two things will happen - either Gary will "fix" his effort issues and he'll become a great player, or he won't show effort in practice and will end up riding the bench his entire career. It's obviously a risk - not quite on the level of Born Ready, but still a sizable one.