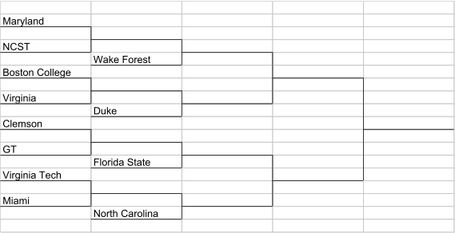 I messed it up slightly last time...here's the fixed version.

Maryland pretty much got the best possible outcome. I'm sure NCSt will be want some revenge for Vaz's last-second, unnecessary three-pointer, but I'd still rather play the Wuffies than Jack McClinton and Miami. Of course, I'm still expecting a blowout loss, but the odds are better.

If they win that one, the Terps play Wake Forest in the second round. The Deacs are obviously beatable - one could argue that the Terps should've finished them off a few days ago. Obviously, they didn't, but it's still a winnable game. Again, I'm expecting a blowout loss, but I'd rather have Wake than any other team except FSU.

If by some miracle they win that one, it'd probably be UNC. That's the point you know the dream is over. But we can dream, right? Where's John Gilchrist?