Is the Tournament Out of the Question Yet?

Share All sharing options for: Is the Tournament Out of the Question Yet? 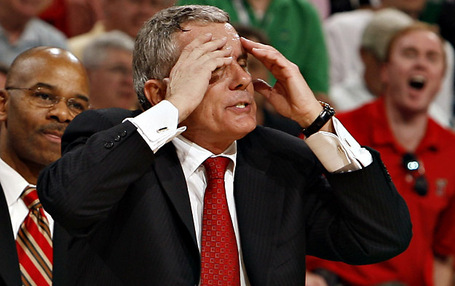 A lot of people are saying that Maryland is now completely finished, with no chance to get a bid for the NCAA tournament. With all due respect, that's the bitterness talking - they're still in it. The bubble is still weak - one win in the tourney would get them back in the discussion, two might even sew up a bid.

Yes, a few more teams definitely got in today (Texas A&M, for one), but a few more did exactly what Maryland did (Penn St.). They can still point to wins over North Carolina and Michigan State, along with a pretty good SoS. Obviously, having a sub-.500 record really hurts, but no other bubble team has wins over two top 10 teams.

I honestly believe that one win in the tournament would get them back in contention for a bid. Think about it: had Maryland beaten Virginia, then lost in the first round of the tournament, plenty of people would be saying that they're still in a decent spot for a bid. Flip the two scenarios - instead of beating UVA and losing to NCSt, beat NCSt and lose to UVA. A slightly worse loss and a slightly better win. It's not a big difference.

Two wins would pretty much guarantee a spot, especially because they'll have to play one of North Carolina, Duke, Wake, or Clemson in the first round. And yes, this team is perfectly capable of beating those teams.

I don't know what it is, but some apparently think Maryland won't win even in the first round. While that's completely possible, this is the same team that beat UNC. There's no difference. They're inconsistent as hell, but they are still completely capable of beating Miami/NCSt (who they should be 3-0 against) and beating Duke/Wake (they should've beaten Wake in the first place).

I'm not trying to be delusional here, but in the gigantic meltdown going on everywhere else, there needs to be a positive thought. Do I expect this to happen? No. I halfway expect them to lose by 30 in the first round. But that doesn't mean that it's out of the question. There's still a shot, and a halfway decent one at that. The committee, fortunately, isn't as kneejerk as the average Maryland fan. The loss hurts, but it doesn't end the dream. It just makes the journey a lot tougher.