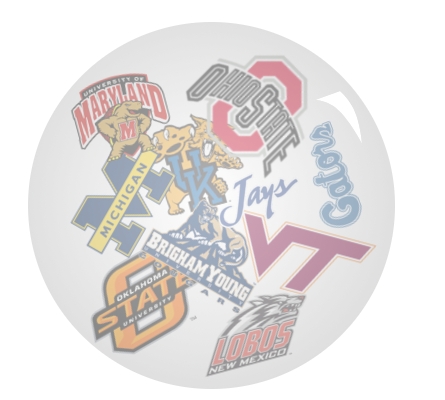 Yeah, I used the same graphic twice in a row, so sue me.

Maryland actually had pretty much the best two days you could hope for - if they don't get into the Dance with the recent performances by other bubble teams, someone seriously screwed up. Yes, Penn St. probably sealed up their spot with a win over Illinois, but other than that, nothing particularly bad happened and a lot good did.

Maryland ended up going 9-4, and I'm not going to complain. Penn State did get a huge win, but Virginia Tech, Miami, Florida, South Carolina, Kentucky, and Providence all really hurt themselves. Like I said earlier, Maryland's road is paved.

With that said, Saturday will likely be a deciding day to see exactly who gets in and who doesn't. There's actually no games tonight, which means I'll spend the night: A) watching Watchmen and B) watching Montrose Christian-Oak Hill (watch out for Justin Anderson, considered by many to be the best player in 2011 and a Terp target). Anyway, here's who to root for on another big day tomorrow.

Georgia Tech @ Boston College: Root for Georgia Tech. Tech already helped Maryland with a win over Miami, hopefully they can do it again. BC lost unexpectedly to NCSt, and if they lose here (unlikely) they're in the same spot Maryland is.

Michigan @ Minnesota: Root for Minnesota. The Gopher's win over Wisconsin was really big, and Minnesota is in very good shape to get a bid. Michigan is teetering. I'd rather get a guarantee of one not getting in instead of taking a gamble hoping neither does, but risking both. Therefore, I'll be pulling for Minny.

Kentucky @ Florida: Root for Kentucky. Anyone with any sense would realize Kentucky isn't an NCAA tournament team, but the committee doesn't always use common sense. That's why I'm a little hesitant to pull for UK in this one, but a loss would probably knock Florida out. Man, the SEC is terrible this year.

South Carolina @ Georgia: Root for Georgia. After a loss to Tennessee, South Carolina is looking pretty bubbly. They aren't quite on it yet, but a loss against Georgia would be bad enough to knock them down almost to Maryland's level. A win, and they're in.

UMass @ Rhode Island: Root for UMass. Rhode Island may have consistently coming out the wazoo, but a loss to UMass would refute that. It'd be a really bad loss that's too late in the season to overcome, at least with R.I.'s record.

Missouri @ Texas A&M: Root for Missouri. Though I wouldn't bet against TAMU making the tourney, you never know what'll happen. A win over Missouri would be a clincher.

Penn St. @ Iowa: Root for Iowa. The Illinois win really helped out PSU, but a loss against Iowa would undo everything the win did for them.

Oklahoma St. @ Oklahoma: Root for Oklahoma. Oklahoma St. is pretty much a slightly northern version of Texas A&M. They find themselves in very similar position; again, a win would clinch a spot, though a loss wouldn't knock them out.

New Mexico @ Wyoming: Root for Wyoming. New Mexico is currently teetering on the edge, and one of their big positives is their record in conference. It would be tough to overcome a loss to Wyoming.

Stanford @ Arizona: Root for Arizona. Though they're in a good spot, 'Zona needs one more win to feel really confident about a spot; a loss to Stanford would be killer.

Duquense @ Dayton: Root for Duquense. Dayton really could've used a win over Xavier to lock up a spot. They didn't get it, and much like BC, they're slowly falling back down to bubble status.

UNLV @ San Diego State: Root for UNLV. I really don't care - they are at about the same spot, to the point where who wins and who wins doesn't matter. I'm just a fan of UNLV.