Who Are These Guys?: Lance Stephenson

Share All sharing options for: Who Are These Guys?: Lance Stephenson

Maryland's next big possible commitment is Lance Stephenson, of course. It struck me that, other than people saying just how great he is, I have no idea who he is, or even really what his game is. He's committing in just a matter of days (now it's nine) and it could make or break next year. If he comes to Maryland, Greivis Vasquez will almost certainly stay, and suddenly Maryland is a top 25 team. If he doesn't, Greivis probably leaves, and Maryland is back on the bubble. Here's exactly who Lance is: 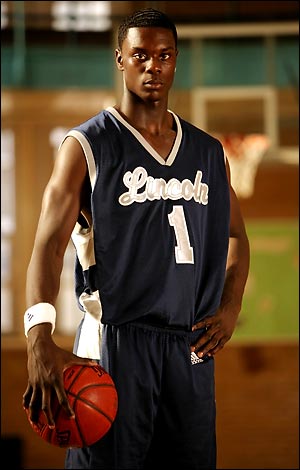 Name: Lance Stephenson
Height: 6-5
Weight: 220
High School: Lincoln (same as Terp commit James Padgett, Sebastian Telfair, and Stephon Marbury)
AAU: Juice All-Stars
Position: SG/SF
Rankings: #9 overall on Rivals, #8 overall on ESPN, #3 SG on ESPN, #1 SF on Scout
Strengths: Lance has an NBA body already; if you’ve never seen him on TV, he’s frigging gigantic. I honestly think 6-5, 220 is an underestimation. Hate to compare him to someone so good, but his body is very similar to LeBron. He wants the ball in his hands, and attacks the basket. His game’s all about strength - he’s tough and strong, and he finishes around the basket like a center. He’s actually very good on defense when he wants to be and he's a wonderful passer. I could see him getting 3 assists a game, and he has the size and athleticism to shut down anyone he wants to. He can score in bunches; when he gets hot, look out. Just give him the ball and let him go. His mid-range game is actually pretty good. He’s not extremely athletic, but is big and strong-willed enough to drive by more athletic players. He knows how to score, plain and simple. Has all the talent and competitiveness to become one of the best players in college basketball. Some say he has issues on the court, but those only appear when his team is losing. If what someone else does works, he doesn’t care that he wasn’t the one who scored. It’s well known that he’s not a selfish player - he has no problem with making the extra pass. He’s extremely competitive and will wear his emotions on his sleeve. His character flaws are overblown, from what I've seen and heard, especially because some fellow players have said that he's a hungry player who wants to win. Oh yeah: he's tight with Jay-Z and Fat Joe, too.
Weaknesses: In a word: attitude. Even if I think they're exaggerated, a lot are concerned about his uncoachability, his complaining, his rolled eyes, etc. He was kicked off the U18 US basketball team. Again, these aren’t problems when the team is winning, so at least he’s not a TO style cancer. However, he is known to go into selfish mode and try to dominate the game. Here’s the problem with the selfish-mode thing: there’s never been anyone else on his team. Padgett’s the only other guy worth **** on Lincoln, and he’s the only guy on his AAU team. It’s unclear if he does it to win or does it for stats. In the end, it all boils down to how he reacts with Gary and Greivis. It’s clear that Gary and Vaz are allies, and if they combine to reel him in (they very well could - Vaz was Lance’s tour guide, so they probably have some chemistry; Gary could be the bad cop, Vaz the good one) there’s no doubt in my mind Stephenson would be the best freshman in the nation. If not, he’ll still do well, just not as well as we would hope. There are also minor concerns on his 3 point shot, but his midrange game is money, so I feel the 3 pointers will come.
Comparison: Just looking at him, LeBron James. As for his game? He reminds me of a SG version of James Johnson. Tyreke Evans is a good comparison, but Stephenson was outplaying him from his freshman year. A bigger Rodney Stuckey at a higher competition level.
Prediction: If Gary and Greivis control him - 17+ ppg, 6 rebs, 4 assists. If they don’t - 12 ppg, 4 rebs, 2 assists.