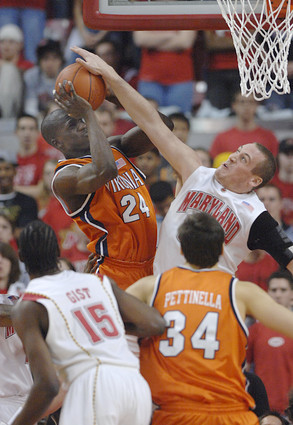 I was one of the Dave Neal haters at the beginning of the year, you could say. Anytime he did anything, I would just be forced to sigh and say "Dave Neal." After all, he's 6-6ish, 263, has T-Rex arms, and looks pretty stupid when he runs. He'd seen minimal playing time before this season, and when he played, he looked horrible.

But somehow, he ended up as the glue that kept the team together. It started in the Michigan State game, where he hit a couple of big threes. He became the team's three point specialist from that point on (kinda sad, kinda awesome). Despite massive size disadvantages, he held his own against other teams' centers (many of whom had 3 to 4 inches on him). He knows the game better than anyone else on the team, by far. He hustled and exerted more effort than any Terp I remember since 2002. He never should've seen the court, but ended up as a solid player. Who could forget his remarkable senior night against Wake, or his badass screen on Nolan Smith? Since that screen, I've loved watching guards skitter around him nervously. No, he wasn't super-star material, but he was a solid glue guy.

Even more than play, he provided senior leadership. He wasn't quite the Greivis Vasquez style leader, but he was the lone senior and it was obvious they relied on him for guidance. Without the future YMCA/Church League superstar (hate to break up the flow here, but I always thought these comparisons were stupid - he's 6-6 and can shoot; there's no way he's not getting picked first in a pickup game), I'm not sure the Terps make the tourney. For that reason, I would like to extend my appreciation to Neal, especially with all the hate I heaped on him at the very beginning of the year: Thanks, Dave.