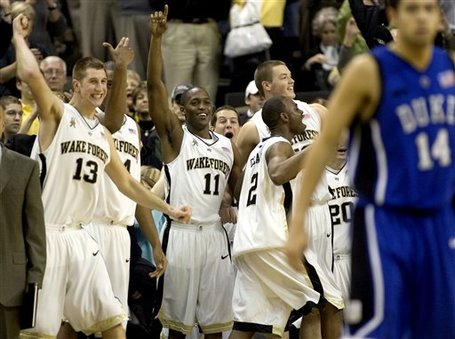 I think McFarland has the best non-Scheyer Scheyerface in the business.

Tomorrow's game is huge for Maryland; win, and a .500 record in the ACC is guaranteed. Lose, and suddenly the season finale at Virginia is a very important game. Also, a win over Wake would give Maryland an extra Top 25/50 RPI win, which the committee always loves.

It won't be easy, though. Wake is a very good team, though they've kind of fallen apart a bit since ACC play started, at least compared to the OoC team. Jeff Teague is money, and Al-Farouq Aminu is one of the more talented freshman in the ACC. James Johnson is a consistent scorer and all-around player - not as dynamic as Teague, but still a great player.

The lineup is rounded out by LD Williams, a steady, tough junior, and Chas McFarland, a 7-footer who'll cause matchup problems, but also completely capable of pulling off the Scheyerface. Wake has their own version of Eric Hayes, with Ish Smith,  a point guard who comes off the bench by still gets about 20 minutes a game.

Wake matches up with Maryland as such:

If you couldn't tell, Wake is matchup hell for the Terps.

The biggest, most obvious problem is Chas McFarland. Maryland doesn't have anyone within 3 inches of the man. If Dave Neal really mans him up, McFarland will have a 6 inch advantage on him. I really think Jerome needs some playing time; his wingspan and athleticism can make up for his lost inches. Hopefully, Gary realizes this.

Then there's the problem with Greivis on Aminu. Though Vaz is never one to back down from a challenge, he's at a big size disadvantage. Aminu is a skilled and smart player who'll know how to exploit this. Greivis will have his hands full, but better him doing it than Mosley. Expect Aminu to go to the post and try to back down on Vaz. A lot of help defense will be needed in both these situations.

I'm a little less worried about the Milbourne-Johnson matchup. Landon has consistently show his ability to matchup defensively with bigger players; I have faith that he'll come through. Also, Teague and Williams are pretty much even with Mosley and Bowie, but guard has never been Maryland's problem.

But given how big the other two mismatches are, I'm assuming that Maryland won't use a straight man defense. Unfortunately, Maryland's better defensive efforts have used man defense.

Offensively, there's a slight quickness advantage with Milbourne and Vaz, but both Aminu and Johnson are very athletic, so don't expect either Milbourne or Vaz to be running circles around their man. On another bad note, Wake is an outstanding rebounding team, which is one of Maryland's biggest weaknesses. They're also one of the better shooting teams from the field (#2 in the nation in FG%).

Wake's a very good team, but there are certain things in Maryland's advantage. For instance, being at home. Comcast will be rocking, and that's always a big advantage. Also, Dino Gaudio isn't the best coach. He's a stud recruiter, but when it comes to gameday coaching, Gary wins every time. And there's always Greivis Vasquez - he's the X-factor. In a more solid, statistical view, Maryland is still one of the best FT shooting teams in the nation. Wake, despite having a high FG%, isn't a lights out team from 3, with just the 228th best 3pt%. They tend to turn the ball over a lot, at 16 a game.

In the end, though I think Maryland is completely capable of winning, unless Greivis has another UNC-esque game, Maryland will be hard-pressed to pull a win out. Gun to my head, I pick Wake in a close one.