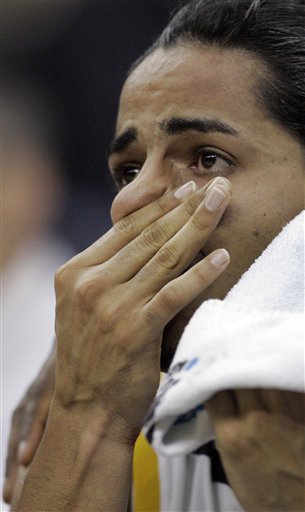 Jorge Gutierrez was clearly having trouble after fouling out. So much trouble that he ended up in tears. Like, uncontrollable tears...for almost two minutes. I'm left feeling 50-50 on whether it's okay for this guy to lose control like this, or whether he should've pulled it together.

On the affirmative side, the guy was a pretty good player. He hustled and made some big shots. His defense was better than expected, and he had energy out the wazoo. He left everything out on the floor. Also, the NCAAT is a competition that ends extremely suddenly. It's natural to feel broken up about it.

On the negative, the guy was incredibly annoying. He wasn't even annoying in the way a good, energetic defensive pest is annoying. No, he was Dukie annoying. He flopped at least four times that I counted. He also played Greg Paulus defense (very, very handsy). Even worse, he had his hair in a bun. I mentioned in the game thread that he looked exactly like Kristi Toliver throughout the game. As homertuck mentioned also in the game thread, it almost looked like he was wearing glitter. I feel no sympathy when this guy feels bad.

Also on the negative, he really couldn't control himself. It'd be one thing if his lower lip quivered a bit, or his nose got runny. It's another thing to sob uncontrollably into his towel. It's not even as if he's a senior and won't get another shot at the NCAA tournament. He's got three more chances!

How do you see the issue?