Who Are These Guys?: James Padgett

Share All sharing options for: Who Are These Guys?: James Padgett

Maryland's next big possible commitment is Lance Stephenson, of course. It struck me that, other than people saying just how great he is, I have no idea who he is, or even really what his game is. Because he should commit in a matter of days (well, not anymore), I decided to take a look at all the scouting reports involving him, and found out some interesting things. While I was already on the Googling trail, I figured I should look at Maryland’s other recruits as well. I was pleasantly surprised by what I found. So surprised, in fact, that I decided to share it. Leading up to the big Lance decision, there’ll be profiles on the Maryland commits, as a countdown of sorts. First up was Jordan Williams. Now, James Padgett. 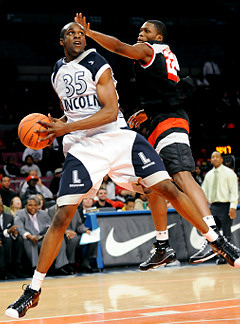 Name: James Padgett
Height: 6-8
Weight: 220
HS: Lincoln; Brooklyn, NY
AAU: Juice All-Stars
Position: PF
Nickname: Probably Padge. The double "t"s are unnecessary to me. Still a bit long, though.
Rankings: 3 stars on Rivals; 4 stars on Scout, #21 C in nation; 87 on ESPN (equivalent of four star), #70 PF
Strengths: Padgett's a glue guy. Willingly does the dirty work for his team. Fights for rebounds, hustles a lot. He's powerful in the post for his size. Good leaping ability, long arms, big hands. Very good rebounder. He's improving his low post offensive game. Great on defense; he's not afraid to bang with bigger guys, and holds his own. Like Williams, he can run the floor. Very athletic, and he has a great frame to add more weight. Great motor, very coachable. Lot of potential.
Weaknesses: Still needs to get better with his low post game. Not a very consistent offensive option. No jumper at all. FT shooting is average at best. He has trouble controlling passes into the post. The skills are there, and occasionally you’ll see a great low post play with good technique, he just needs to be more consistent. Still raw. Needs to put some more weight on him.
Comparison: Similar to DJ White a few years back. Similar to James Gist, but a better rebounder already. Patrick Patterson is actually pretty close, though he’s not as polished nor as strong. Shares some characteristics with Taj Gibson out at USC. Tiny Morton likened him to Lonny and Chris Wilcox after he committed, but outside of the fact that all play in the frontcourt, I don't see too many similarities.
Prediction: Starts out behind Jordan Williams, but he may end up above him. His weaknesses are fixable. He’s Gary’s type of player, and he’s never had a halfway decent coach (Tiny Morton showed up late to a nationally televised game). If he puts on some weight and is willing to work hard in practice, he could end up being great. If he puts on weight but doesn’t improve anywhere else, he’ll still be a decent player. If he improves his game but doesn’t put on weight, we have James Gist v2.0. Funny, they’re both named James.
Other Useful Links: Scout; Rivals; Meet James Padgett; Baltimore Sun Writeup