Who Are These Guys?: Jordan Williams

Share All sharing options for: Who Are These Guys?: Jordan Williams

Maryland's next big possible commitment is Lance Stephenson, of course. He very well could make his decision (possibly to the Terps) on Saturday. It struck me that, other than people saying just how great he is, I have no idea who he is, or even really what his game is. Because he should commit in a matter of days, I decided to take a look at all the scouting reports on him, and found out some interesting things. While I was already on the Googling trail, I figured I should look at Maryland’s other recruits as well. I was pleasantly surprised by what I found. So surprised, in fact, that I decided to share it. Leading up to the big Lance decision, I figured why not do some profiles on the other Terp commits, as a countdown of sorts. First up is Jordan Williams. 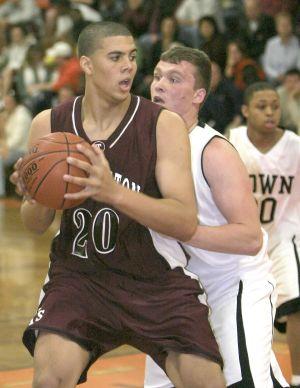 Height: 6-9
Weight: 240
HS: Torrington; Torrington, CT
AAU: Albany City Rocks
Position: F/C
Nickname: I’ll shorten it to JWill until we can find anything better.
Rankings: #102 nationally on Rivals, #25 PF; #99 nationally on Rivals, #17 C; 89 Grade on ESPN (equivalent of a high four/low five star)
Strengths: Jordan has been utterly dominant against his competition. He averaged about 40 and 20. Great free throw shooter, which won't change when he reaches the college level. Powerful post player. Solid defense, good in the low post. Very strong, can wreak havoc in the low post. Contact doesn’t seem to both him; he can easily finish and-one’s or grab rebounds in traffic. Soft hands. Runs the floor surprisingly well. Late bloomer. Good upside. Had that backboard-breaking dunk not too ago, which should give you a hint as to his ability.
Weaknesses: Frankly his competition sucks, so we don’t know exactly how good he is against D1 players. Game mostly limited to the post; he won't be taking any Landon Milbourne style jumpers. Defense, while not bad, could be better, especially with the size advantage he’s had. Relies on his size a bit much, so his technique may need some work. He's not yet academically qualified, but he's "getting there". It appears he'll be qualified soon, but you never know.
Comparison: Game is similar to Al Horford, but probably wouldn’t be as dominant at the collegiate level. Trevor Booker is a good comparison, only a bit taller and a little less athletic. A bigger, stronger Carl Landry, that Purdue PF a few years ago.
Prediction: Will start his first year here, average 8 and 6. 4 year player, All-ACC his final 1/2 years.