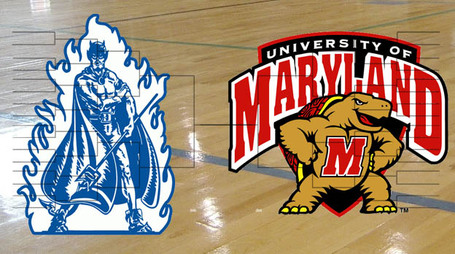 In case you're wondering, yes, that is a secondary logo for Duke. I figured that Duke should have a horrible logo to go along with the god-awful jerseys they'll be sporting.

A lot of people say it's tough to beat a team three times in one year. I've never really understood it (it's clearly false in football) but if it helps, I'll take it.

It'd be great to get this win, but it's still not completely necessary in my mind. If everything breaks wrong, Maryland could just barely get squeezed out, but they'd be the last team to go. In fact, in my quick look at auto bids, locks, and bubble teams, I found 9 spots left for grabs, with 9 teams fighting for them. Even if two or even three of those spots disappear, Maryland's looking better than Penn State, Arizona, San Diego State, New Mexico, and Saint Mary's right now. If they get blown out against Duke, then maybe the committee would take a second glance, but everything is pointing for them being in.

Of course, that doesn't mean I don't want a win. I'm ready for these guys to just go out and take the whole thing. Unfortunately, Duke is a pretty bad matchup for the Terps; it'll be a similar game to the one in CP, methinks. Duke 81, Terps 74, score closer than the game.