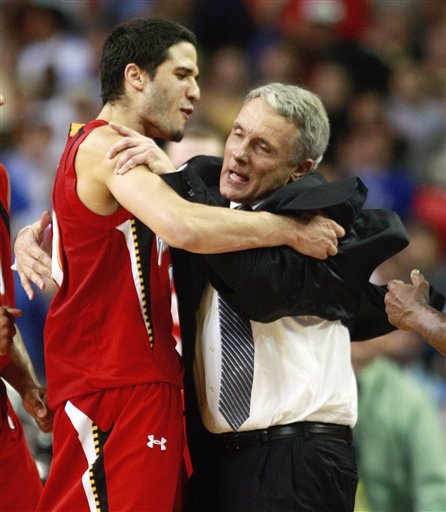 I think the guys need to buy up some stuff from here...anyone have recommendations?

It was an all-around great game from everyone involved. Everyone did what they needed to. Even Brax performed his job (fouling McFarland at the end of the half). Sure, Bowie and Tucker combined for just 7 points, but they didn't make any mistakes. Bowie actually played pretty well today; he was solid, if unspectacular.

Of course, Vasquez ended up being the hero. He was surprisingly close to another triple-double; he put up 22 points, 8 rebounds, and 9 assists. He didn't seem that dominant when I was watching it - maybe I'm getting spoiled by great performances? He made only a few mistakes, which is just as big as all of his big shots.

Sean Mosley was tonight's Eric Hayes, you could say - he played well on defense - one of his strong suits - and was surprisingly solid on offense. He actually made layups and hit open shots. Hayes also had another solid game - he was smart with the ball, hit his free throws, and made a few open shots. Really, if Maryland can get 12 points a game each out of Mosley and Hayes, I'll be much more confident about their chances in the near future. They could be key in providing another perimeter scoring threat.

As to one of the points made last night, Dino had a great night, both defensively and offensively. He quieted down in the second half, but I still came away impressed. On the other hand, Landon Millbourne had a nice bounce-back game after a couple of poor showings. His offense was decent, as was his defense, but his real impact came on the boards - he outhustled everyone on Wake Forest, which was completely necessary with their size advantage, and pulled down 11 rebounds. He was a big reason for their performance on the boards - Maryland actually outrebounded Wake by 11.

More than just Milbourne, though, everyone made an impact on the boards. It takes a huge effort to beat a team with as big of a size advantage as Wake had in rebounding, but Maryland did it. Several times, there were three to four Maryland players under the basket, compared to one or two Deacs. Five players had six or more rebounds, which demonstrates just how involved everyone was.

Gary had his second straight great coaching performance. Shutting down NCSt is one thing, but Wake had a complete size and athleticism advantage over Maryland. The zone worked tonight, and Jeff Teague was shut down for 30 minutes, which is no easy task. More than tactics, they were ready to play and came out motivated.

The best part of all this is that Maryland is all but officially in. I see almost no way they get left out with their resume: 20 wins, a strong SoS, and wins over three top 10 teams. The bubble is still weak, and when their resume is compared to Penn State's or Saint Mary's, it's clear who comes out on top. Everyone would love to beat Duke tomorrow, but we can also relax a little bit.

It was an emotional win, but one everyone related to Maryland needed. Tonight is a night of celebration.