Next Up: Georgia Tech

Share All sharing options for: Next Up: Georgia Tech 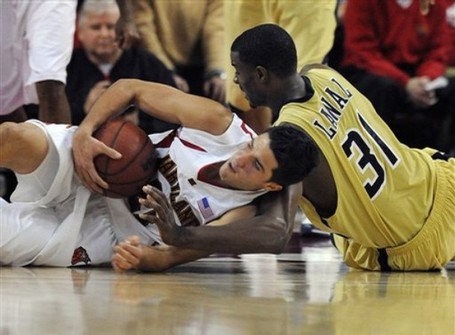 (I've been away from the comp today, so this post was quick. There's probably some typos, but no decreased quality, of course.)

Maryland had a tough game against North Carolina, but that's in the past now. If you take anything from it, it should be how well Maryland actually played - in a vacuum, that might've been Maryland's best performance all year.

Unfortunately, life doesn't function in a vacuum at all, so Maryland needs to rebound against Georgia Tech. Funnily enough, we were saying the same thing about a month ago after Maryland lost to Morgan State - they needed to come back and beat Georgia Tech. They were able to then, but it really didn't have too much to do with their play.

Instead, they profitted more from Georgia Tech's mistakes. Georgia Tech had a higher FG%, a higher 3pt%, more rebounds, more assists, and more blocks than Maryland. For most of the game, Maryland was outperformed. The one stat that changed the game was turnovers. The reason Georgia Tech lost was mostly preventable - though Maryland played solid defense, it probably wasn't a 28 turnover good defense. Georgia Tech also had a significantly higher foul count than Maryland, leading to more FTs (and easy points) for the Terps.

If Maryland wants to win, they need to play aggresively - Georgia Tech has had problems with turnovers all year long, and if they can get in GT's face, I expect more TOs. More aggresive players like Sean Mosley and Adrian Bowie should get a lot of playing time tomorrow.

Offensively, Maryland needs to find someone to step up again. Eric Hayes had 17 points the first time around, besting Vaz's 16. Rarely does that happen, but I'm not going to complain about it. It throws off the defense and takes the pressure off GV. Seeing how he's still been struggling to get his shot to fall, either Landon or Sean or someone unknown will need to have a really big game to keep GT's defense off of Grievis.

The one thing Maryland needs to do better is shoot the ball. The first game was absolutely horrible - no one on the team was in a rhythm except maybe Hayes, but even he was *eh*. If they go down to GT and shoot in the mid-20s again, I don't see them exiting with a win.

This game is huge, if only for confidence and bragging rights. Maryland needs a strong finish for this year to set themselves up for next year, especially with Lance Stephenson in the equation - if he becomes convinced Maryland is a team that's just one great player away from a deep tourney run, they'll look a lot more attractive compared to what they are right now: St. John's 2.0, only away from home.

Honestly, I do not sense a great deal of excitement or urgency right now. I actually think that's good - the media (including myself) is focusing more on Gary and Lance than the players themselves, which is a nice break - hopefully the lack of criticism lately will keep everyone calm, cool, and collected.

My prediction: if Maryland plays like they did against UNC, it'll be a win. I don't see that happening, so it'll be close, but I'm picking Maryland: 75-69.