Maryland [17-9 (6-6), RPI: 53, SOS: 31] There aren't many schools in the country that can boast about beating two of the top five teams in the country. But Maryland can do it after stunning North Carolina 88-85 in overtime in College Park on Saturday. Coupled with its 80-62 victory over Michigan State (neutral court) on Nov. 27, Maryland has certainly worked itself back into at-large contention. But the Terrapins still have some work to do because of their middling computer numbers. Other than the aforementioned victories and so-so home wins over Michigan, Miami and Virginia Tech, there isn't much else on their résumé. The Terps are only 1-5 on the road and 4-7 against RPI top-50 opponents. (They're 8-8 against top-100 foes.) At 6-6 in ACC play, the Terps probably need to win two of their last four regular-season games (home against Duke and Wake Forest and at NC State and Virginia), and possibly win a game or two in the ACC tournament, to feel confident on Selection Sunday.

Pretty much what everyone knows. A win over Duke or Wake would be huge, but in the end I think irrelevant. The big ones are wins over UVA and NCSt - get both, plus one in the ACCT, and it's all but guarenteed. 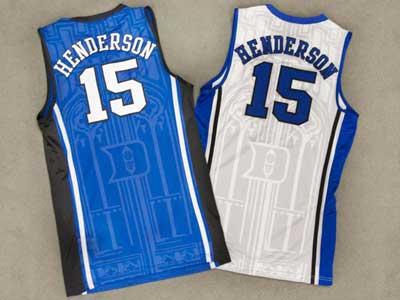 The Duke men’s basketball team will wear an alternate Nike jersey on Sunday, Feb. 22 vs. Wake Forest in Cameron Indoor Stadium at 7.45 PM ET. The alternate jersey will feature an embedded design inspired by some of Duke’s iconic buildings and Gothic architecture on the back of the uniform.

Duke will sport the home white uniform a second time vs. Florida State on March 3, and unveil the road blue version at North Carolina on March 8.

Using Nike Aerographics technology, an engineered mesh providing zoned cooling and reducing the yarn by half, the weight of the jersey is reduced by 31 percent compared to current uniforms. Duke will be the first college program wearing jerseys that utilize this technology.

Hopefully they decide to break out the road blues against Maryland's yellows. The jersey advantage alone would give Maryland a 12 point head start.