Share All sharing options for: Terps Beat UNC In Overtime 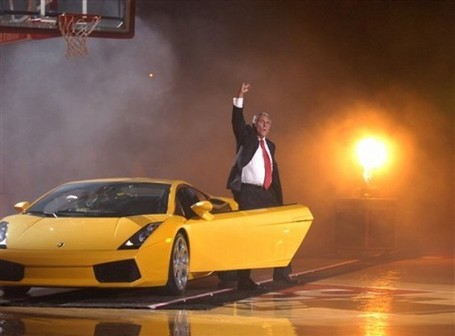 Honestly, I'm flying much too high right now to give any real analysis. But I can say this - what a game. One of the best I've seen. Terps were down 16 in the second half, down 9 with just 2 minutes left, and still won.

Vasquez's performance today was easily the best I've seen for a Terp, maybe the best ever. He had only the 2nd triple-double in Maryland history, and was simply unstoppable. But it was more than that - everyone executed. Cliff Tucker had an amazing game, and is now certainly a starter. Hayes played well. Mosley played well. The only person who had a bad game was Milbourne, but people around him stepped up.

The 4 guard set works. It just works for Maryland. It needs to happen much more. Gary could stick some combo of Vaz/Hayes/Bowie/Mosley/Tucker out there with Millbourne/Burney/Neal/Gregory and I'd be confident. Other teams aren't used to it and it throws them off. I don't think it could be the entire game, but for 5 minutes at a time, it's perfect.

Gary Williams is a great coach. Say what you want about recruiting, but the man can coach out of his mind.

Unfortunately, Lance didn't see the game. He was visiting Kansas instead. But he'll see the highlights, for sure, and that can only be a good thing. This might've given Maryland a lead. Tobias Harris was also in the building, and he'd be a good get for next year. Also, Roscoe Smith was there, but it's doubtful he was there for Maryland - more likely, he wanted to see UNC.