Maryland had a huge win today, but there was other big news in Maryland - the introduction of mohawks to the team. Of course, Greivis had been rocking the fauxhawk for quite some time, though he recently got a haircut, which is supremely disappointing. Today, Adrian Bowie definitely had a mohawk - it was clear. See below. 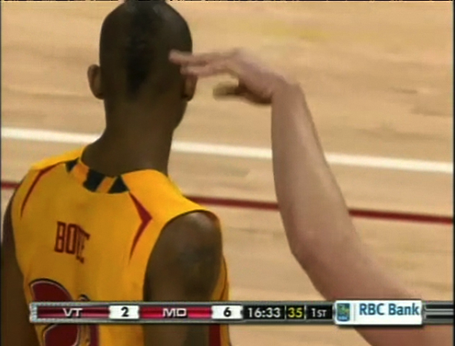 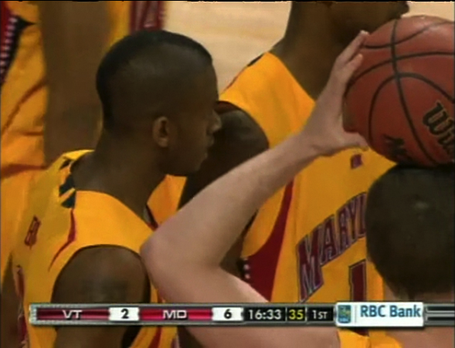 Maybe not the cleanest in the world, but it's obviously there. No debating it. Landon Milbourne also showed up with a new 'do, and looks like he almost pulled a Bowie, but decided against it at the very last moment. The evidence: 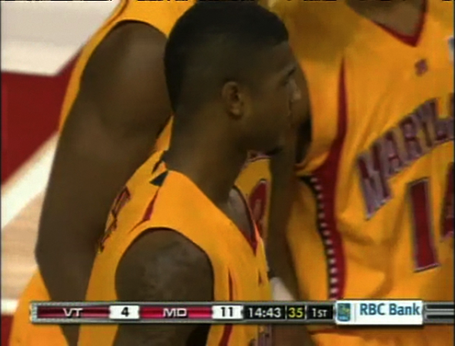 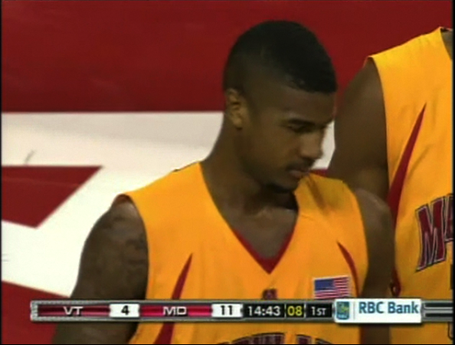 With Landon, the hair's a little thicker. I'm not sure if it can truly be classified as a "mohawk". If not, it's really close. Like, by a couple of centimeters.

I'm afraid that a few more guys may do this. Luckily, Dino doesn't have enough hair and Burney is already bald. Cliff would look retarded if he went with the mohawk, though.

UPDATE: Some quotes via Sports Bog.

Sean Mosley: "It was supposed to be a team thing. We was joking around about it, everybody was supposed to get a Mohawk today before the game....Landon was the first one that got the Mohawk, then Adrian came the day after at practice with the Mohawk, and we were just talking, you know, 'Everybody gonna get a Mohawk!' I was joking around. I'm not cutting my hair, so I'm just gonna keep my little bush."

Adrian Bowie: "They let us down, man. I thought at least three or four other guys were gonna get it. They were talking about getting it, but they didn't."

Eric Hayes: "It's not quite long enough yet to get the real thing. Maybe in a week or so you'll see me. Stay tuned for that."

Greivis Vasquez: "I had it before everybody else. I had it first. They got it now, they're trying to copy me. I mean, I liked it. I told Landon he should keep his on, he's playing well. He's been playing well the last two games, but today he was a monster."

Landon Milbourne: "I think a couple other guys are gonna try to get 'em, but it was just great. Just a new look, try to get some new attitude going....Guys gave us a couple compliments, so it was good for us."

Sean Mosley: "[Williams] told me in practice, he was like 'Who's the next guy who's getting a Mohawk?' He said, 'Sean, you should get one, you'd probably look nice, because you've got a lot of hair.' "

Looks like this may turn into a team thing. I could see Sean doing it, and that might look good. But I can't see them on anyone else.

Personally, I think they look ridiculous. Do you?