Share All sharing options for: More on Lance Stephenson 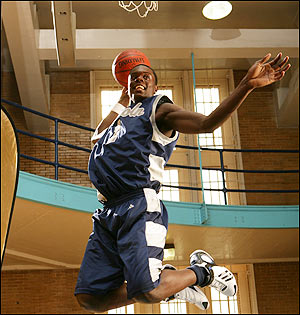 As reported last night, BR did indeed get left off the Jordan All-Star Classic roster, which is a bit of a sham. The main theory is that he got left off because he wear-tested for Under Armor, and if that's true, I'm fine with it.

It's funny - St. John's is a Jordan Brand school. Maryland is an Under Armor school. If he really does care about a shoe deal, it's looking really good for the Terps. I still have my doubts, because it doesn't seem like Nike would be that petty, but Sonny Vaccaro used to run things; shoe deals are gigantic in recruiting top players.

Zags (see link above) has put together all the players who have been rumored to have been selected to play in the McDonald's AA Game, and Lance isn't one of them. The actual decision hasn't happened yet, so no one knows, but that's a big detractor - if he does end up at Maryland, he should get as much good pub as possible beforehand.

Unfortunately, the pipe dream of him playing in the Capital Classic doesn't seem to be a possibility - UA has pulled out of it, and it appears that it's not going to happen this spring. Hopefully he can find another place to play.