Got bored today, so I decided to crunch some numbers, because they usually make more sense than my half-baked opinions. I'll get to the headline after the jump, but for now, it's time for points! 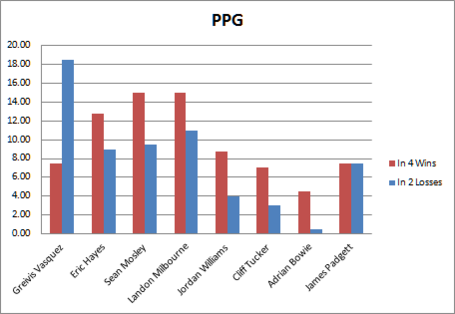 Obviously, Greivis Vasquez is what should stick out the most to you here - in losses, he both took more shots and scored a lot more points. Don't, however, confuse the causes and effects here: because Maryland was losing for most of the contest for both games, Greivis tried to carry the team on his back and therefore got more points. Maryland didn't necessarily lose because Greivis put up points, though I suppose you can take that any way you see it. I won't argue you that Greivis has played awfully no matter what.

Numbers don't help a lot when analyzing Greivis Vasquez's play, especially right now. It looks like he does bad, but Maryland wins because he plays under control. Maryland does bad, it looks like he does good, but they really just start giving him the ball and telling him to score. Maryland could definitely use a second option against actual, legit competition.

I wouldn't read too much into the drops of others, though, because Maryland scored significantly less in their losses than in their wins. Sadly, I'm not going through and normalizing these values - I'm not that bored. The only two I'd really pay attention to would be Vaz's, obviously, and Adrian Bowie, who basically disappeared in Maui. I was also a bit disappointed by Cliff Tucker's regression - he could've been big off the bench.

With points out the way, how bout we get to the bigger problems: rebounding. 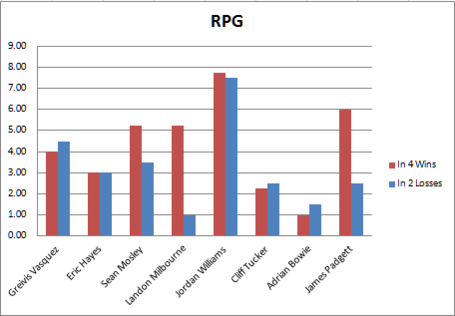 Look at the culprit here: Landon Milbourne. Tsk, tsk, tsk. Milbourne should be bringing in 5 rebounds a game; in Maryland's two Maui losses, he had 1. Even in the wins he wasn't outstanding, barely breaking 5 against below-average competition.Some argue that, because Landon was in foul trouble and thus didn't play much, so his numbers were deflated. To counter that, I looked at the performance by minute, and the graphs are almost identical. 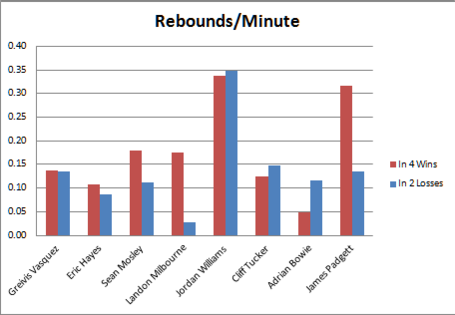 Something is seriously not right with Mr. Milbourne, and the more I think about it, the more I warm up to the idea of Landon at the 3. It can't be a full-time thing - Maryland simply has too many good guards to keep off the floor and Landon is definitely a liability at the spot defensively. But his rebounding is so terrible that he's going to start losing time to Jordan Williams and James Padgett anyway, and he's better than Jin Soo Choi. He'd also present a matchup problem on offense for smaller threes.

I'm still shying away from the idea of starting 2 freshman and having literally JSC and Goins as our frontcourt depth, though. I'm all for decreasing Landon at the 4, bumping him up a little at the 3, and taking away some of Adrian Bowie's minutes, who's been in a funk ever since last year. Greivis Vasquez could stand to see a small decrease in the short-term, too.

On the good side, color me impressed with Jordan Williams and, to a slightly lesser extent, James Padgett. Williams needs to start trimming some fat, and fast, but once he gets cut he'll be a force. The next piece of the puzzle with him, though, is learning how to dunk. All-ACC at that point. Padgett has some nice post moves that I didn't expect - he's a bit limited by his size compared to Williams, but makes up for it with his athleticism.

Any thoughts on the graphs? Not a lot of conclusions to draw from it that we didn't already know, of course, but it's nice to see it in numbers form.