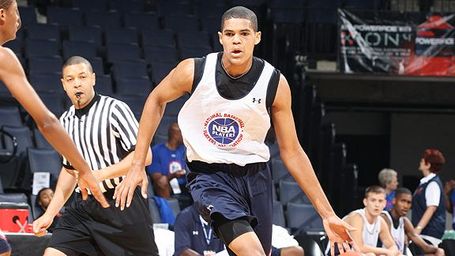 So we'll know where Tobias is going in less than 8.5 hours. There was an interesting update on Zagsblog that he posted at 1:00 AM this morning that I thought was worthy of it's own post. He breaks down the factors that Tobias used to weigh his decision. Here they are:

A. Strong academics in my major (Entrepreneur/Sports Management)

B. The "feel" for the school, teammates, coaches

E. Family within the team

H. Program that Tobias wants to take to the next level

I. Top basketball schedule in the country

J. A team that will allow Tobias to be a point forward and plays an uptempo NBA style

L. School that Tobias can make an immediate impact at

M. Coaches that can help push Tobias to improve his overall basketball game for the NBA

N. School that can help Tobias improve his defense for the next level.

Based on these, you have to feel like Maryland has a shot. I know that some of the other schools might be better at some things and I also know that I don't know enough about a lot of the schools to make a fair comparison to the Terps, but after reading these, I feel like we might have a decent shot now. Probably wishful thinking, but I needed something to help me get through this countdown today. So, below you'll find my assessment of each of Tobias' priorities for the school he choses and how I think Maryland stacks up. Enjoy.

- Trust with the coaches - I think all of the coaches at the school's he's considering can be trusted and that is something only Tobias can make a decision about. I think it's just more of the vibe he gets from a coach

- Family within the team - I think if last season showed us anything it's that this team sticks together and picks each other up, even in the worst of adversities

- Unselfishness of team players - I think everyone on Maryland plays unselfishly. Even Vasquez, who can shoot the ball more then he probably should sometimes, dished out 13 assists in the season opener.

- Player's Coach - I'd say Gary falls into the category.

- Program Tobias wants to take to the next level - I think Maryland needs someone to take them back to that upper echelon (like Juan Dixon did), so I think Tobias could be that person.

- Top basketball schedule in the country - guaranteed to play Duke twice and UNC, Wake, Clemson, Georgia Tech...hard to argue against the ACC schedule not being one of the hardest. Too bad we're not in the pre-expansion schedule anymore, where we play each team twice.

- School that's well respected - UMD falls into that category in both athletics and academics (especially the business school, with is a top 10 school nationally)

- School that Tobias can make an immediate impact at - Tobias could step right in where Greivis leaves off, as one of the go-to guys on our team. Can you imagine Mosley, Bowie, Harris, Williams and Terrence Ross (or Tucker or Padgett). That would be pretty $$.

- Coaches developing players for the NBA - I'd argue that this is a great strength of Gary's. Gary develops players. He takes players and makes them better. Dixon, Baxter, Blake - all prime examples. I guarantee you no one would have thought that Dixon would become the all-time leading scoer in Terps history when he arrived on campus as a freshman. And look what Gary's helping Greivis do - If Vasquez didn't think playing and learing from Gary this year would elivate his draft status, he could have gone over seas or tired to get drafted back in June.

- school that can help Tobias improve his defense - Come on down Mr. Harris. I think getting players to play good D is something Gary strives to make all of his players do. If you don't play D, you won't see the court for Gary.

- Good student body - I think we've got that covered.