Share All sharing options for: A Statistical Look at Ralph Friedgen's Coordinators

It's not uncommon for us to get emails asking us questions, our opinions, or making various points (if you ever want to do any of those things, our email is at the bottom of the page on the envelopes [testudotimes AT gmail dot com (boo spammers)]). What is uncommon is when someone makes a point and backs it up with a wealth of information and data to support it.

But that's just what a certain Stephen did when he emailed us with a point about Maryland's assistant coaches. He thought that the quality of Maryland's coordinators had been lacking since the departures of Charlie Taaffe and Gary Blackney, and that, as an extension, Ralph Friedgen's decision-making when it comes to personnel had been lacking. Steve compared the rankings across coordinators over the years, and the evidence speaks for itself. 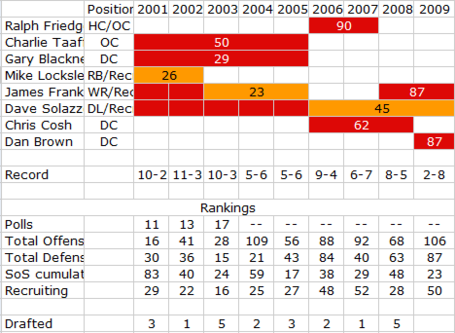 If that's a bit difficult to comprehend, just look at it for a second, and you should understand. Orange is for recruiting coordinators, red for coordinator stints. The number inside is the average during that person's term, whether that's recruiting rankings (via Scout), total offense, or total defense.

I threw together some graphs as a supplement to his already awesome research (lower the better, of course): 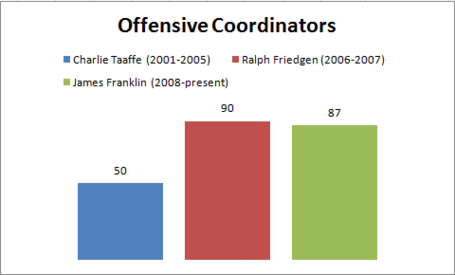 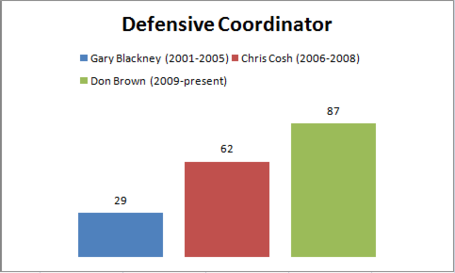 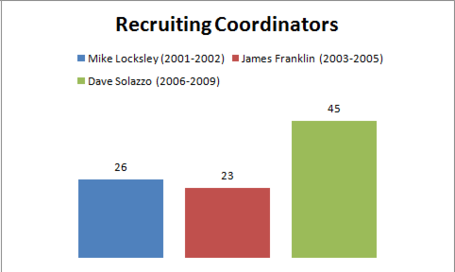 It may not say much we don't already know, but it affirms one thing: that when it comes to personnel decisions, Ralph (or whoever's making these decisions) isn't the best. We all know how dependent a HC is on his coordinators, and since Blackney and Taaffe's departures, they just haven't been there.

Interestingly enough, both Blackney and Taaffe are coaching again, for the ringmaster of the group, Ralph's good friend George O'Leary. As for the recruiting coordinator, well, Solazzo is basically Ralph's protege - he played under the Fridge at the Citadel and coached under him for most of his career.

The one good thing I saw in it: the best ranking in the recruiting coordinator job came from James Franklin, who should soon be the head man.

I thought this was a very interesting take on things, so I decided to see what people think of it. Any opinions?