Ashton Pankey's Commitment to Maryland, and What it Means for the Terps

Share All sharing options for: Ashton Pankey's Commitment to Maryland, and What it Means for the Terps 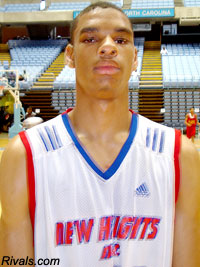 Maryland gained a commitment today from New York - okay, fine, New Jersey - located Ashton Pankey, a 6-8 PF from St. Anthony's. That's Maryland's fourth commitment on the year, joining Terrence Ross, Mychal Parker, and Terrence Stoglin. Of course, you already knew that, but I figured I'd put my thoughts out on it anyway.

Pankey perfectly fulfills what this class needed, better even than Hippolyte Tsafack would've, particularly if Maryland is able to pull off the impossible and land Tobias Harris. Quite simply, he's a grinder. Similar to James Padgett, he's a scrappy guy, not afraid to work hard and get his hands dirty, who specializes in rebounds, putbacks, and quality defense. Basically, he's the perfect realization of the adage that "not everyone can be a five star." Because, really, they can't.

Maryland already has a great shooting guard in Ross, who's been described as "the perfect wing". Then there's the hyper-athletic Parker, who's not a first option but is at home at the 3 and excels at the dribble-drive. Then there's Stoglin, who's an underrated scoring point guard - he can put up points if needed, but he's not lacking in traditional PG characteristics. If everything goes well and Maryland can add Harris to the mix, they'll bring in the star to make the entire thing go. Harris is absurdly efficient and effective with the ball - he's always reminded me as a slightly less athletic, much more complete version of James Johnson, minus the judo and messed up head. He's a threat from everywhere on the floor.

Add to that already very strong group the one thing they don't have - a grinder. He'll clean up the others' misses, get putbacks, and play solid defense. Don't forget that Maryland already has a cerebral big man in Jordan Williams - they need the gritty hustler, which is Pankey to a T. In a lot of ways, he's a slightly less more athletic version of James Padgett with a bit more less of a complete, developed game; that's the type of guy you can never have too many of.

Maryland could do a lot worse than Pankey, and there aren't a lot of ways they could do better (well, technically, yes they could, but in reality, no). And that's just on his game. His intagibles are a great fit, too.

Gary loves hard-nosed guys with great work ethics, which is Pankey. He's played under the notoriously rough, tough love pioneer Bob Hurley at St. Anthony's, who - believe it or not - might be tougher than Gary. He won't be a Braxton Dupree-style washout.

Add to the positives that he develops a connection to St. Anthony's, perennially one of the best in the talent-rich state of NJ, if not the entire country. They're a bit down this year, but they're traditionally very, very good.

Maryland's 2010 recruiting season could be over as soon as Wednesday, when Tobias Harris is supposed to sign. If he puts his name on the dotted line on a piece of Maryland stationary, not only can the Terps move on to 2011, they'd have a top 5 recruiting class in the country - made even better by the balance that someone like Pankey provides.