Share All sharing options for: Coutdown to Tipoff: Greivis Vasquez

As we close in on basketball season, we here at Testudo Times will be previewing the team player-by-player, starting with the freshmen and working our way up to the seniors. We'll be closing it up today, November 13 (that is, Maryland's first game) with the final player preview plus a full team preview. Check out our previous previews:  Ersin Levent/David Pearman, Sean Mosley, Jin Soo Choi, Steve Goins, Jordan Williams, James Padgett, Adrian Bowie, Cliff Tucker, Dino Gregory, Landon Milbourne and Eric Hayes. 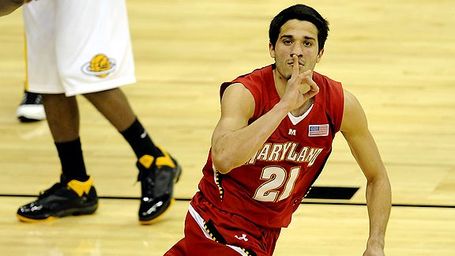 And now for the main event. The 6'6" senior guard hailing from Caracas, Venezuela, The Venezuelan Sensation, Greivis Vasquez.

Terp Nation let out a collective sigh of relief when Greivis decided to step back from the NBA draft and return to Maryland for his senior season. Although this team would still be decent without him, the expectations would definately be much lower for this team had Vaz decided to stick it out in the NBA draft. But since Vasquez did decide to return, we have a possible ACC player of the year candidate for the first time since Juan Dixon.  We also have an emotional leader, a good floor general, and I guy who can will his team to victory. Although some people knock on Greivis for showing too much emotion some times, you have to remember that this guy wants nothing more than to win. And he wants to do that while proudly wearing "MARYLAND" across this chest. I'm still finding it hard to believe that his career with the Terps is in it's final year. It seems like yesterday that Greivis was walking into Gary's office, saluting him, and saying "Reporting for duty, sir"

A lot can be said about Greivis' game.The offense runs through him. When the Terps struggled last season, it was after they moved Vasquez off the ball and let Bowie and Hayes be the primary ball handlers. Vasquez talked to the coaching staff and asked to be reinserted into the floor general position. That decision sparked the on their run to the NCAA tourney.

Vasquez can do a lot in terms of scoring - slash to the hoop, shoot the 3 (although he can get carried up in his emotions some times and shoot a 3 before the offense gets set), draw contact and get to the line (where he was one of our best free-throw shooters last season and improved from 78 to 86% over the previous season), and works the back door cut incredibly well.

Not only can he score, but he can also rebound, dish out the ball, and no longer takes as many risks as he once did. Vasquez has improved his game remarkably over his career at Maryland. Although people jumped on him for taking too many risks when he was running the point, Vasquez cut down on those last season, going from 4.4 turnovers/game down to 2.8.

But where Vasquez goes, the team normally follows - whether that's racking up a triple-double in an OT win over UNC or scoring 4 points and turning the ball over 4 times in a blow out loss to Duke. Fortunately, most of the time Vasquez is on his game, which almost always gives the Terps a chance to win.

He's improved every year he's been a Terp and he's actually closing in on a lot of Top 10 records in school history.

Vasquez is going to be good. He knows, after going to various NBA scouting camps and workouts, what he needs to improve on. And he is driven and dedicated to making those changes this season. So what do we expect out of our start senior guard?

I think Vaz will score some more points every game because people are going to have trouble stopping him. And with good players now roaming around the lane, that should allow for Greivis to get some easy assists. What do you think? Or are you just saying "THANK GOD BASKETBALL STARTS TONIGHT! WOOOO!"